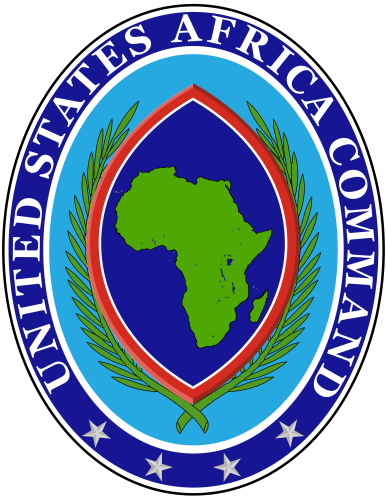 AFRICOM (US Africa Command) is one of six of the US Department of Defense’s geographical combatant commands, and is responsible for the Secretary of Defense for military relations with African nations, the African Union, and African regional security organisations. The Command is responsible for all Department of Defense operations, exercises, and security cooperation on the African continent, and amongst many other things, is involved in providing counter-IED training for some African militaries.

The Command, which began initial operations on 1 October 2007 and became an independent command on 1 October 2008, has a broad mission: “Builds defense capabilities, responds to crisis, and deters and defeats transnational threats in order to advance US national interests and promote regional security, stability, and prosperity.” It is headquartered in Stuttgart, Germany, with others assigned to AFRICOM units at MacDill Air Force Base, Florida, and RAF Molesworth, UK.

The Combined Joint Task Force-Horn of Africa (CJTF-HOA) is a good example of measures taken under AFRICOM to try to counter IEDs. CJTF-HOA is “a dynamic operational headquarters, effectively countering extremist organisations in East Africa.” It was originated under Operation Enduring Freedom – Horn of Africa as part of the US response to the September 11th attacks, and has its headquarters in the Republic of Djibouti. The Task Force works with countries, coalition forces, and international organisations to support partner nation military operations in East Africa fight violent extremist, including by providing counter-IED training.

AFRICOM has been involved in providing counter-IED training in a number of African countries. Examples of such involvement includes a training programme in Kenya in 2011, where a team of US Army soldiers from CJTF-HOA spent a month teaming up with the Kenyan Army to develop a counter-IED training program from militaries in East Africa. This involved sharing information with classes of service members from countries including Rwanda, Burundi, Sudan and Uganda. Initially, the class was comprised of 20 Kenyan soldiers, with eight remaining at the facility to teach the curriculum to new students, in a ‘train the trainer’ type of programme. US Army Staff Sergeant Joshua Moore said of the training: “when we first started, [the student instructors] didn’t know what IED stood for, but by the time we were finished, they were teaching the class pretty much entirely on their own. The lessons, which involved both classroom and practical exercises, could save hundreds or thousands of lives.

A more recent example, involved the training of the Burundi National Defense Force in best practice counter-IED detection. The US Marine Corps Special Purpose Marine Air Ground Task Force Africa (SPMAGTF), which is specifically trained to support US and partner interests throughout the US Africa Command area of responsibility, trained the National Defense Force for 10 weeks, ending in November 2014. The same group (SPMAGTF) worked with the Ugandad People’s Defense Forse, focusing solely on detection techniques and safety precautions when dealing with IEDs. This training began in October 2014, ending in December of the same year, and “covered the basics for what steps each UPDF soldier can take to keep themselves and their fellow soldiers safe if they encounter an IED.”

Such training is increasingly important in a region which is seeing more and more IED attacks. It is crucial that those likely to encounter IEDs, including police and military personnel, know how to safely clear an area and then defuse an IED. The practice of training a smaller number of personnel who can then use these skills to train others in their national armies or police forces is extremely important, and is an efficient means through which information can be quickly and accurately shared.