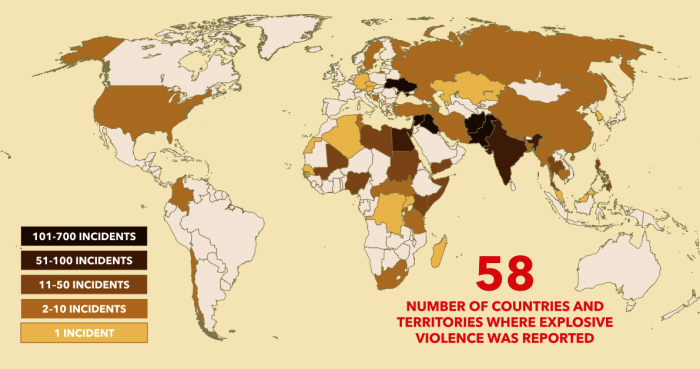 AOAV’s new report Explosive States, released today, has been featured in the Guardian, Russia Today, the International Business Times, Ma’an, IRIN and a number of other media outlets.

The report shows that global civilian deaths and injuries in 2014 from explosive weapons have gone up for the third consecutive year.

These numbers reflect a 52% rise from the numbers of civilians who were hurt or killed in 2011, when AOAV started its explosive weapon monitor (and when 21,499 civilian casualties were recorded).

In the report AOAV analysed the global harm from the use of explosive weapons like missiles, artillery and improvised explosive devices (IEDs).

Iain Overton, Director of Investigations at AOAV, said of the findings: “This is the third consecutive year that we have seen an increase in civilian deaths and injuries from explosive weapons. With civilians bearing the brunt of explosive weapon harm in Gaza, Ukraine, Nigeria, Iraq, Syria and Afghanistan the question has to be: ‘How many more will have to die before states agree to end the use of explosive weapons in populated areas?”

“But it is not just governments causing this harm,” Overton said, “Last year the biggest single bombing we recorded was a massive IED attack at a mosque in northern Nigeria. These weapons are killing and injuring civilians the world over, and collective action is the only way we are going to reverse the trends of recent years.”

The lead researcher on the project, Robert Perkins, said: “State use of heavy explosive weapons shot up last year. More governments were using more bombs, and all too often they are trying to take out targets within populated areas. Our data has shown year after year that this practice kills and injures civilians far too often for it to be chalked up as unavoidable, isolated mistakes.”

The CEO of AOAV, Steven Smith, responded to the data by saying: “Our findings show that bombing and shelling is not just a problem of the battlefields of Iraq or Afghanistan. It’s one that hits us in our homes, our markets, our mosques and our schools. The use of heavy explosive weapons in populated areas is unacceptable, but all too predictable.”

Read the International Business Times’ piece on AOAV’s report: Ten years on from London terror attacks, time is ticking down to Europe’s next major bomb blast.

See IRIN’s chart using the data in AOAV’s report: Which wars are the worst for civilians?