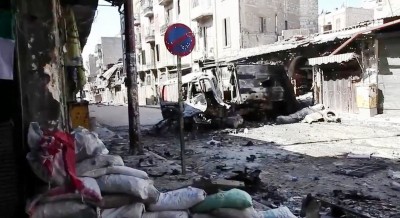 Vehicles after a bomb attack in Aleppo, Syria.

Almost 60 million people are currently forcibly displaced around the world; one in every 122 people on this planet. Many are displaced within their own country’s borders, but those seeking refuge in foreign countries have to take deadly risks to get there, crossing countries themselves torn apart by war and getting into over-crowded boats to make the often fatal crossing to, for example, Greece and Italy.

In 2015, and particularly in the last couple of months, there has been a huge increase of refugees into Europe. Since June 2015 more than 52,000 people have been registered at a Reception Centre in Macedonia, one of the main routes used by refugees to get to countries like Germany. It is estimated that at least that many again have entered the country without being registered. UNICEF reports that 3,000 people are transiting through the country daily; a third are women and children. An estimated 4,000 arrived on the Greek island of Lesbos on Saturday alone.

The European response has largely failed these people, many of whom have fled death and destruction on an unimaginable scale. Walls and barbed-wire fences have been built to try to stop people crossing borders, governments have refused to accept asylum seekers, and the language used by government officials and some media outlets has dehumanised refugees to “swarms.”

The majority of those coming into Europe are from Syria and Afghanistan. The International Rescue Committee says that 80% of those landing in Lesbos are Syrian, and 14% are from Afghanistan, where “chronic conflict” persists. Others are arriving from Eritrea, Nigeria, Iraq and Somalia

Over four million people have fled Syria, and 12.2 million in the country are estimated to be in need of humanitarian assistance. Those fleeing from Syria are fleeing a country which has been torn apart by conflict, and while violence with small arms has impacted the country, most of the devastation has been caused by explosive weapons.

Handicap International recorded that nearly 84% of all conventional weapon use in Syria between December 2012 and March 2015 was with explosive weapons, compared to 16% with small arms and light weapons. And even though the UN Security Council has demanded that “all parties immediately cease all attacks against civilians, as well as the indiscriminate employment of weapons in populated areas,” they continue to be widely used in areas populated by civilians.

The aftermath of a barrel bomb in a residential area in Aleppo.

Weapons like barrel bombs, rockets, mortars, and large IEDs have demolished many of Syria’s cities, killing an estimated 250,000 people and injuring over a million more. An Amnesty International report in May 2015 shows the harm caused in Aleppo by barrel bombs, dropped by government forces on civilian areas: the attacks “have made life for civilians in Aleppo increasingly unbearable. These reprehensible and continual strikes on residential areas point to a policy of deliberately and strategically targeting civilians.” In 2014, more than 3,000 civilians in Aleppo were killed by these air dropped barrels, packed with explosives, fuel and metal fragments. The bombs have caused some of the worst injuries of the conflict, with witnesses describing seeing “children without heads, body parts everywhere. It was how I imagine hell to be.”

Armed groups have also killed civilians in Syria, with Syrian rebels using ‘hell cannons’ and shelling in seemingly random attacks, and ISIS detonating massive IEDs in civilian populated areas. AOAV recorded 30,098 deaths and injuries from explosive weapon use in Syria up until 30 June 2015, 87% of whom were civilians. And though the use of barrel bombs has been widely reported in the Syrian conflict, the biggest cause of civilian deaths and injuries from explosive weapons is ground-launched weapons like artillery, mortars, tanks shells and rockets which resulted in 42% of civilian casualties.

And while the physical deaths and injuries caused by explosive weapons have taken a huge toll on Syria, additional impacts have made it nearly impossible for civilians to remain in some of the worst affected areas. Explosive weapons have wide area effects, resulting in the destruction of civilian homes, infrastructure and health services. “Sometimes a 10-story building will be destroyed” by a barrel bomb, and photos of cities such as Aleppo and Damascus show entire neighbourhoods reduced to rubble from shelling and bombardment. The family of the little Syrian boy, Aylan Kurdi, who was found dead on a Turkish beach this week was from Kobani, a city which is contaminated with unexploded weapons “beyond our worst nightmare.” Over 1,000 bomb craters, some more than 10 meters wide, can be seen in the city, and nearly 80% of buildings have been destroyed.

Attacks have forcibly displaced tens of thousands of civilians whose homes have been destroyed by the impact of a bomb or a mortar. Explosive weapons destroy water mains, sewage systems, sanitation infrastructure and oil pipelines, destroying things that are essential for survival. Mosques, churches and schools are frequently targeted, as are places like markets, making even food shopping a potentially deadly activity.

One area which frequently feels the full impact of the use of explosive weapons is that of the health care system. The lack of essential infrastructure can lead to the malfunctioning of health care facilities, leading to the spread of otherwise treatable diseases. Those injured in attacks often die in hospital due to the lack of availability of medicine and treatment. Health workers are killed or leave a conflict zone, and hospitals themselves are often directly targeted, in violation of International Humanitarian Law. 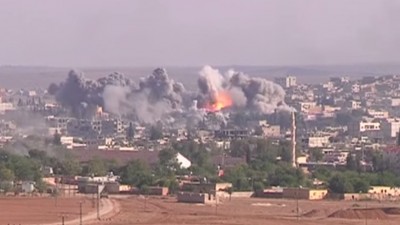 In Syria, hospitals have been under near constant attack from bombing and shelling. In 2013 it was reported that field hospitals in the Deraa province were under such constant shelling that they had “literally been driven underground, forced to operate in the basement of houses.” Between 7 and 10 August this year, MSF reported that air strikes landed on or near nine hospitals in Idlib province. And in June this year the only hospital in Dara’a Governorate which was able to provide neonatal and dialysis services was destroyed by ten barrel bombs. Between May and June 2015, 40% of the functioning hospitals in East Aleppo were attacked with explosive weapons. The lack of medical resources has a direct impact on those in Syria, particularly for children. There is a “serious lack of pre-natal and post-natal care, woeful conditions for paediatric patients in many health facilities,” and children are unable to access routine vaccinations.

The use of explosive weapons in Syria, by both government and non-state armed groups, has devastated much of the country, and civilians are bearing the brunt of the harm. In 2014 AOAV recorded that 81% of those killed and injured by explosive weapons were civilians. They are being killed and injured in their homes, as they pray, as they shop and as they go to school. Bombs dropped from the sky and fired from the ground are levelling their neighbourhoods. The life expectancy in Syria has fallen by 20 years down to 55.7 years since the start of the conflict. The country’s Growth Domestic Product has shrunk by 40%, and economic loss is estimated to be $200 billion. People struggle to obtain even the most basic supplies like food and water.

Is it any wonder that people are fleeing for their lives from Syria? The use of explosive weapons in populated areas has made this country virtually uninhabitable, blocking and breaking all the vital infrastructure that makes a normal life possible. The protracted and persistent bombing of populated areas in Syria since 2011 has helped drive what has been dubbed the biggest refugee crisis since World War II.

This is a crisis that needs an urgent humanitarian response. It is also a crisis with roots in violence and conflict, and countries must collectively develop a long-term response to ensure that what we have seen in Syria, Libya, and now Yemen is not repeated in the future.

AOAV is a founding member of the International Network on Explosive Weapons (INEW). We believe that urgent action is needed to tackle human suffering from the use of explosive weapons in populated areas. Currently more than 40 countries have spoken out to acknowledge this severe and predictable pattern of harm, and governments are now coming together to work towards a political commitment to reduce this harm to civilians.

AOAV calls on governments to stop the use in populated areas of explosive weapons with wide-area effects, to work together to develop a political commitment to refrain from such use, and to work for the full realisation of the rights of victims and survivors of explosive weapons.

Action must be taken immediately to stop this crisis spiralling even further. In addition to immediate action, states must address the harm being caused globally by explosive weapons. Without such action, civilians will continue to be killed and injured, and countries will continue to be destroyed to such an extent that their population can no longer remain within them.