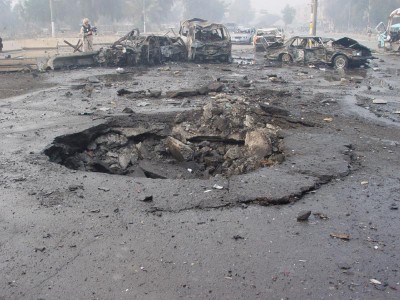 Aftermath of a car bombing in Baghdad, Iraq

Twin suicide bombings yesterday brought a bloody end to a period of relative peace in Beirut’s southern Burj al-Barajneh district. As worshippers streamed out of mosques in Hezbollah’s working-class Shi’i stronghold, they were met by two consecutive blasts which ripped through the rush-hour crowds and left at least 43 dead alongside hundreds of wounded. A third bomber was reportedly found dead at the scene, having failed to detonate his own lethal payload.

This attack is the first major suicide bombing to take place on Lebanese soil since the attack in Tripoli in January, but it is not the first time that Lebanese civilians have suffered the consequences of Syria’s internal conflict. In the period from January 2010 to August 2015, AOAV recorded 14 suicide attacks in Lebanon. Of these attacks, eight were claimed by specific groups – two by the Liwaa Ahrar Ahl al-Sunna (Free Sunni Muslims Brigade) group, two by the Abdullah Azzam Brigades and four by the Nusra Front. The Abdullah Azzam Brigades made it clear that their attacks, which targeted Iranian interests, were to punish Iran and Hezbollah for their participation in the Syrian Civil War. The Nusra Front have targeted the Alawite Arab Democratic Party in Tripoli and a petrol station, a government administration building and a checkpoint in Hermel (a Hezbollah stronghold), all ostensibly to punish Hezbollah and the AADP for their support for the Syrian regime. But it wasn’t Hezbollah or any other militant group that suffered most from these attacks. Of the 524 deaths and injuries recorded, 481 (92%) were civilians.

The attack has been claimed by ISIS, who described it as a deliberate attack on Shi’i ‘apostates’. It seems likely that the attack was also motivated by Hezbollah’s recent escalation of support for the Syrian regime. Although ISIS’s claim has not yet been independently verified, their use of suicide bombings in populated areas and to deliberately target civilians is well-documented. In January of 2014 they claimed responsibility for a car bomb attack on the same area as yesterday’s attack. Since ISIS’ creation in 2013, AOAV has recorded nearly 3,200 civilian deaths and injuries as a result of suicide attacks launched by the group. This does not include attacks launched by ISIS’ predecessor organisations, and as more than half of suicide bombings globally go unclaimed, this may well fall far short of the actual number perpetrated by this particular group. Since 2010, AOAV has recorded a steady rise in the number of suicide bombings globally, and ISIS are among their most prolific users. Data from the first half of 2015 suggests that it will be the worst year yet.

The explosives used in suicide bombings are almost exclusively IEDs (Improvised Explosive Devices), home-made explosives cobbled together from readily-available industrial chemicals or repurposed military ordnance. AOAV has previously produced a report on the importance of precursor materials and possibilities for controlling them. To reduce the threat posed by suicide bombings, the materials involved must be cut off at the source. But we also need to combat the ideology which is granting such a seductive allure to the idea of martyrdom.

AOAV condemns yesterday’s bombings in Lebanon. Attacks which deliberately target civilians, or are indiscriminate in their nature, are illegal. AOAV calls on states to do all in their power to undermine and restrict the availability of IED materials to prevent such future attacks, and urges all users of explosive weapons, including IEDs, to stop the use of such weapons in populated areas.

More information on IEDs and suicide bombing is available on AOAV’s website.