This report is part of AOAV’s research on the bombing at the Boston Marathon in 2013. The full report, ‘Blood on the Streets of Boston’, can be read here. The report considered the mental health support offered to survivors and witnesses, for more on this see here, as well as the services that were offered, see here. As part of the report it AOAV also researched the medical care and financial support provided to survivors – this report can be read here – and the health impacts the bombing had – here. It was also important to consider the ‘Victims’ Voices’, from those who survived the attack. To read these please go here, here, and here. 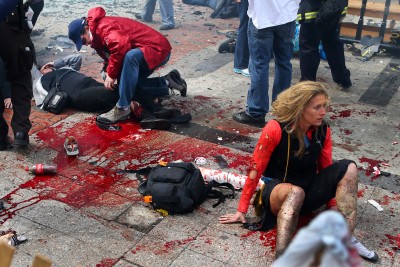 A new report by UK-based charity Action on Armed Violence (AOAV) shows the wide-ranging harm caused by an IED attack, and the extensive and long-lasting assistance requirements for survivors.

Blood on the streets of Boston looks at the 2013 Boston Marathon bombing in which 3 people were killed and 264 injured, some critically. Two individuals lost both legs in the attack and a further 15 lost one leg. A year and a half after the IED attacks AOAV spoke to victims, academics, first responders, health care professionals, mental health workers, service providers, public officials and witnesses to uncover the full impact of the bombings, and the support provided to survivors.

The report found that:

As well as direct physical injuries, many people suffered emotionally, financially and psychologically. Some victims’ lives have been completely transformed by the bombings.

AOAV considers the support provided to those who were most affected in the bombings, analysing services from health care to mental health to financial support. The response to the attacks in Boston can largely be commended.

The actions of state institutions, charitable organisations and other bodies in the wake of the bombings demonstrate both the myriad needs of those impacted by IED attacks, and the benefit of a quick and coordinated response. From immediate health care to financial and mental health responses, those injured in the bombings were largely supported and provided with high levels of care.

As Iain Overton, Director of Research at AOAV, says: ‘the American response to the attacks in Boston can largely be commended. Our findings show that the short and long term responses to most victims of the bombings went a long way to easing the devastating impact of terrorism. Obviously harm was done that cannot be undone, but other cities in the US and worldwide should look at the response to the Boston bombing as an example of how to handle a tragedy.’

In response to the report, AOAVs CEO Steve Smith said: ‘IEDs are a global issue. They are not just confined to the streets of Iraq and Pakistan, and the needs of the victims are the same no matter what country the bomb explodes in. Too often survivors of IED attacks are not given enough support.’

‘While the resources in Boston are undeniably more substantial than those available in countries such as Pakistan, key lessons, such as the importance of a coordinated response, can be transposed,’ said Armed Violence Researcher Jane Hunter. ‘Without such a coordinated and wide-reaching response, victims’ lives will continue to be devastated by these horrifying bombings with no hope for future help.’ 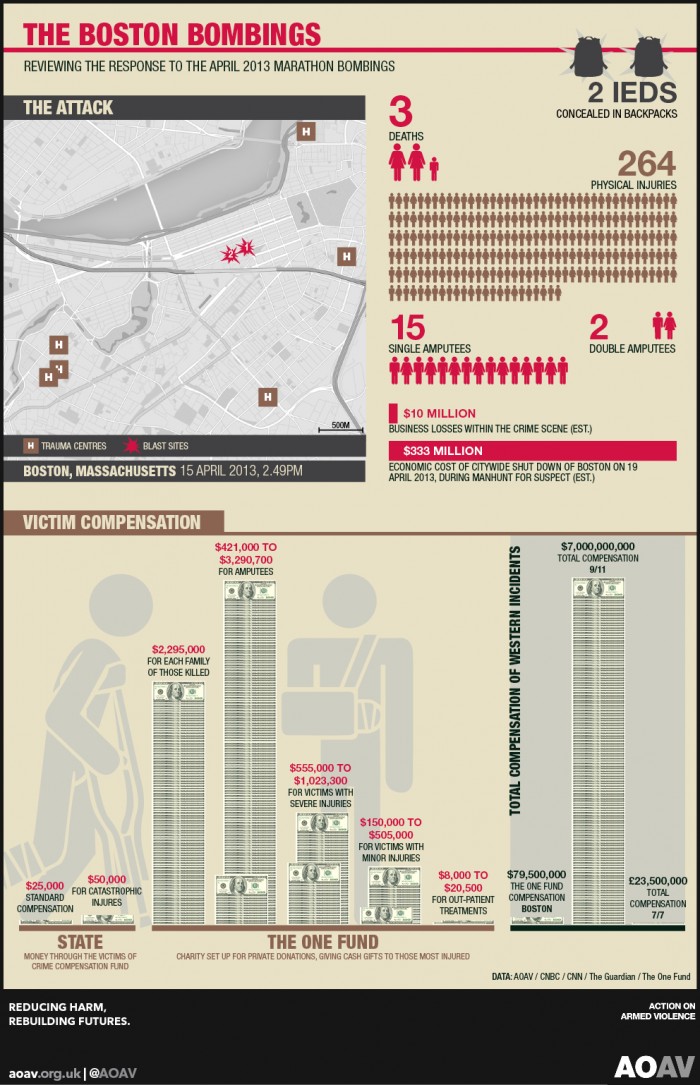