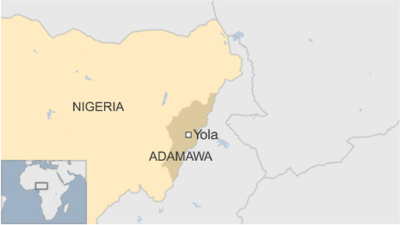 Yola, capital of the Nigerian province of Adamawa, where yesterday’s attack took place

Yesterday a few weeks’ fragile peace in Nigeria’s Adamawa province was broken by the latest in a string of suicide bombings terrorising civilians across the country’s north. The bombing, which took place in a crowded marketplace in the provincial capital of Yola, left at least 32 people dead and dozens more wounded. Although no-one has claimed responsibility for the attack, it bears all the hallmarks of Boko Haram, an Islamist insurgent group who have sworn allegiance to the Islamic State.

Although ISIS may get more publicity, Boko Haram’s local franchise is one of the most lethal and dangerous groups worldwide. This attack comes on the heels of the release of the 2015 Global Terrorism Index, which revealed that Nigeria had experienced the most precipitous rise in deaths from terrorism from 2013-2014 ever recorded for any country, which is largely thanks to Boko Haram.

The group is not solely confined to Nigeria, either – it operates in a broad area around Lake Chad, which lies at the intersection of northern Cameroon, north-eastern Nigeria, eastern Niger and northern Chad. In the period from January 2014 to August 2015, AOAV recorded explosive attacks by Boko Haram in all of these countries. And whilst AOAV has only recorded 31 attacks confirmed to have been launched by Boko Haram in that time, those attacks have accounted for a staggering 1554 civilian deaths and injuries – an average of fifty per attack. For comparison, AOAV recorded 142 ISIS attacks over the same period resulting in 4255 civilian deaths and injuries – an average of thirty per attack. This makes Boko Haram the most fatal user of suicide bombings in the world. They are also, after ISIS, the group to whom the largest number of IED-related deaths can be attributed.

The most lethal attack claimed by Boko Haram during this period – the Abuja bus station bombing – killed 71 people and injured more than a hundred and twenty. And this is without considering those attacks which have not been claimed by the group but can probably be attributed to them based on the circumstances, which include the November 2014 Kano mosque bombing that killed 120 people and injured 170. Boko Haram often makes use of women, children and the mentally ill as suicide bombers. Their bombings often involve several detonations – one after spectators and first-responders have arrived at the scene – and such grisly tactics as hiding suicide bombers among fleeing villagers who detonate once they reach their hiding places.

AOAV condemns Boko Haram’s bombings, which contravene the principles of international law. We have previously reported on the importance of controlling and limiting precursor materials to prevent further tragedies. We urge states to do everything in their power to control these substances. We also call on all users of IEDs and suicide bombings to end the deliberate targeting of civilians.

More information on IEDs and suicide bombing is available on AOAV’s website.