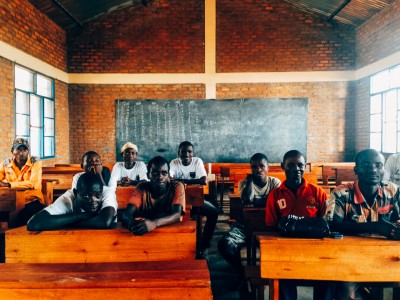 Members of “Bumbatira Amahoro” gather for a training session. (File photo: persons in this story are not represented in the photo.)

With the emergence of the current political crisis in Burundi in late April 2015, Fabrice and Jean de Dieu found their differences more pronounced than ever. Fabrice is a protest leader with an opposition political party and Jean de Dieu is a member of the National Council for the Defense of Democracy – Force for the Defense of Democracy (CNDD-FDD), Burundi’s ruling party. Both young men were born and raised in a neighbourhood in southern Bujumbura, Burundi’s capital city.

Their neighbourhood, like the rest of Bujumbura, has suffered from increasing violence since the end of April 2015 when President Nkurunziza announced he would run for a controversial third term, triggering widespread and sustained protests. But even prior to the protests, Fabrice and Jean de Dieu didn’t get along. They fought constantly and with political tension rising around them, their relationship degenerated further. When the protests intensified in their neighbourhood, Jean de Dieu lived in constant fear of being attacked by protesters like Fabrice.

“Bumbatira Amahoro” (Support Peace), a joint project run by AOAV and its partner in Burundi, the Center for Training and Development of Ex-Combatants (CEDAC), was designed to reach young political leaders like Fabrice and Jean de Dieu, engaging and training them to manage conflict and prevent violence. The project specifically targets former combatants and those who are vulnerable to political manipulation.

Despite their differences, both Fabrice and Jean de Dieu joined Bumbatira Amahoro in April 2015. They attended trainings on conflict management and violence prevention together and, through these trainings, gained more than just conflict management techniques. They were afforded an opportunity to connect with each other in a neutral and constructive environment.

By working towards common goals, conflict prevention and management, Jean de Dieu and Fabrice laid the foundation to protect their community and to repair their relationship. During the course of the interactions in the project, Fabrice and Jean de Dieu were able to reconcile. Neither has fled the country in fear of violence, unlike thousands of others. They remain in their community, working together to communicate to others the techniques and concepts of conflict management and prevention.

Fabrice and Jean de Dieu still attend their respective youth political party meetings. But now they are able to employ key concepts they learned in trainings facilitated by the project. In doing so, they have been able to bring opposing youths together to connect and shake hands, building mutual trust. They serve as an example of the possibility of reconciliation and potential for peace.

AOAV’s work in Burundi is supported by the Bureau of Conflict and Stabilization Operations, U.S. Department of State.