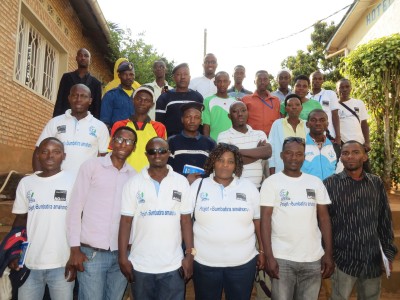 
When John, a member of the project’s Youth Peace and Mediation Committee in Ngozi, sees a confrontation he doesn’t just see two parties fighting.  As a member of “Bumbatira Amahoro”, John sees these seemingly isolated flash points of conflict as part of a greater pattern with potentially far-reaching consequences.  This is an important insight in a country like Burundi; a country that is facing a political crisis and increasing violence following President Nkurunziza’s decision in April to run for a controversial third term.

“Bumbatira Amahoro” was designed to reach young political leaders and vulnerable youth, engaging and training them to manage conflict and prevent violence in their communities. The cornerstone of the project is its Youth Peace and Mediation Committees. These committees are comprised of young political party leaders of diverse backgrounds, civil society representatives, and police and local administrators. The committee members receive training on conflict analysis, peacebuilding and mediation.

In an increasingly tense political environment, John and his fellow committee members are often called upon to intervene in conflicts in their community. John explains, “Recently, we have seen a lot of tension between CNDD-FDD youth and those of the coalition “Amizero y’abarundi.” …[We] can’t pass two days without being called upon by the local administrators to mediate. [In the evening], after drinking illegal alcohol, youths will begin debating politics, which results in exchanging insults, leading to fights in many cases.”

John recalled one evening when on his way home he passed a cabaret that sells a traditional drink called “urwagwa” (banana beer). While passing by he heard a young man cry out “CNDD-FDD members go home now!” John was alarmed. He approached the young man and asked him why he was forcing CNDD-FDD members to leave. The young man explained that it was in retaliation – they had previously done the same to him and members of his political party.

Personal confrontations can, when occurring against a backdrop of political turmoil, escalate into violence all too easily, drawing in others and resulting in patterns of reprisal. John understood the importance of breaking this pattern and decided to act. He explained to the young man the potential consequences if he continued to insult and exclude CNDD-FDD members. Eventually the young man calmed down and agreed to go home. The next day he came to John’s house to thank him for his help.

John recognizes the importance of the peace committee’s work in the context of mounting tensions in his community: “There’s a risk that these tensions could degenerate into confrontation that is difficult to manage at our level.” John and the Ngozi peace committee members are part of the last line of defense against violence in their community and play a vital role in identifying and resolving latent or nascent conflicts when they can still be managed effectively through mediation techniques, avoiding violence.