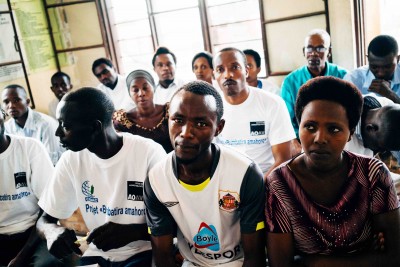 Members of “Bumbatira Amahoro” gather for a meeting. (File photo: persons in this story are not represented in the photo).

On April 25, 2015 Burundi’s current President Pierre Nkurunziza announced he would run for a controversial third term bid. While the announcement came as no shock to most Burundians, its aftermath brought unexpected and dire consequences for many.

Burundi’s opposition and civil society leaders argued that a third mandate was not only unconstitutional, but in contravention of the Arusha Accords; the peace agreement which ended Burundi’s 10-year civil war. They called for popular protests, and in response many Burundians took to the streets of the capital city Bujumbura. Within weeks the protest movement spread to other provinces, including Ngozi.

Like many other young Burundians, Johnson, a resident of Ngozi province, joined in the protests prompting a neighbour, a member of Nkurunziza’s CNDD-FDD party, to denounce him as an “enemy of security.” Fearing for his life, Johnson fled his home and was forced to spend two weeks without shelter.

Fortunately, as a member of “Bumbatira Amahoro” (Support Peace), a joint project run by AOAV and its partner in Burundi, the Center for Training and Development of Ex-Combatants (CEDAC), Johnson had somewhere to turn. Bumbatira Amahoro trains young men and women political leaders to prevent and manage conflict and violence. Johnson called upon his fellow project members who have diverse political affiliations. He explained the situation and the threats against him and pleaded for their help.

Together, Johnson and his fellow project members visited the neighbour who had made threats to explain Johnson’s role in the community and his efforts to promote peace and prevent violence as a member of Bumbatira Amahoro. They appealed to the neighbour to cease threatening Johnson, emphasising the importance of mutual trust and creating a secure environment for all in the community. The neighbour listened to the group earnestly as the multi-party composition of the project meant he was hearing not only opposition voices, but fellow CNDD-FDD members too. Bumbatira Amahoro brings youths of different parties together to work towards peace, encouraging community members to regard the group as neutral and impartial. Following the discussion, Johnson’s neighbour conceded, apologising and promising to stop threatening him.

With the training they have received in Bumbatira Amahoro, the project members were able to navigate this sensitive situation together, united. They were empowered to become leaders in their community, promoting peace and preventing violence across party lines.

AOAV’s work in Burundi is supported by the Bureau of Conflict and Stabilization Operations, U.S. Department of State.