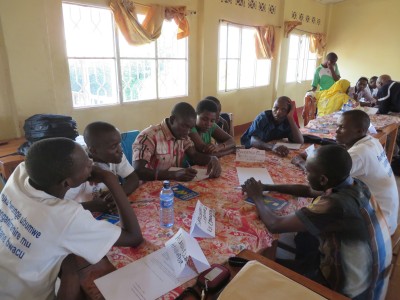 After contested legislative, communal and Presidential elections which led to wide-scale protests and an escalation in violence, Burundians recently prepared to take part in the third and final round of elections amidst high tensions. Elections at the colline (village) level took place on August 24.

Despite the tense atmosphere, Therence, a local candidate for the opposition Amizero y’abarundi coalition, prepared to launch his election campaign in Ngozi province in the north of the country. On the morning of August 4 he was approached by a member of a rival party and warned not to run in the upcoming elections. He was told that, even if he were elected, he wouldn’t be permitted to serve. Despite the warning, Therence continued his campaign preparations only to be ambushed and attacked by the same rival party member shortly after, sustaining serious injuries.

As part of the project “Bumbatira Amahoro” (Support Peace) AOAV and its Burundian partner, CEDAC, have helped to create Peace and Mediation Committees across the country, including in Ngozi province. These committees are comprised of seven members, including five political party youth leaders of diverse affiliations and a representative from both the local administration and police. The committees receive training in conflict analysis and mediation, preparing them to resolve conflict and prevent violence.

Following the attack on Therence, the Ngozi Peace and Mediation Committee was informed and arrived at the scene. Therence’s son had sworn to avenge his father and, armed with a machete, was beginning to search for the perpetrator. He revealed to members of the peace committee: “If I am unable to find the culprit, I will take it out on his family members.” He continued, “There is a saying in Kirundi, ‘The little rat is the victim of his mother’s hatred.’”

Realising the potential for further violence, the peace committee urged restraint, explaining to Therence’s son the serious consequences he would face if he resorted to violence. After discussing the matter with the peace committee, Therence also spoke to his son saying that if he sought revenge, a cycle of violence would develop, hurting both families. Therence’s son eventually accepted the committee’s advice and agreed to let the justice system deal with the incident.

After addressing the conflict, the peace committee took action to prevent similar violence in the community. They met with local political representatives and together they drafted a message calling for political tolerance and warning that those who decided to take justice into their own hands would be prosecuted.

Therence’s story demonstrates the important role that the peace committees can play, working within their communities to resolve conflict and prevent violence, using skills that Burundi can ill afford to do without.