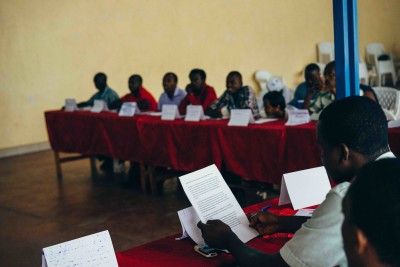 “I have changed my violent character,” Michel explained. Michel lives in Gitega, one of Burundi’s northern provinces which is far from the protests of the capital city Bujumbura, but which has still experienced notable political conflict and violence throughout the country’s turbulent 2015 election period.

A former ex-combatant of the Forces Nationales de Liberation (FNL), Michel is a member of the ruling party now, CNDD-FDD. Since April, when the president announced his intention to run for a third term, political tension in Burundi has steadily increased. While many welcomed the announcement, others rejected the bid categorically, claiming it violated the Arusha Accords and Burundi’s constitution. Like many youth in Burundi, Michel was affected by the mounting political pressure and polarization. “I couldn’t tolerate anyone who threatened me,” he said.

However, as a CNDD-FDD youth leader, around the same time as the announcement was made, Michel was selected as a participant in “Bumbatira Amahoro” (Support Peace), a joint project run by AOAV and its partner in Burundi, CEDAC.   Bumbatira Amahoro aims to encourage young leaders like Michel to find non-violent ways to address conflicts in their communities. The project engages and trains them to manage conflict non-violently, while bringing them together with youth of diverse political backgrounds to cooperate and improve their economic independence through joint savings and lending, as well as entrepreneurship.

Since he joined the project in April, Michel has transformed his behavior and outlook. “Before I was a beneficiary of this project I was really violent. … Today, as I’ve learned non-violent communication and violence prevention, I have changed my violent character.” Michel’s peers recognized his leadership and commitment and he was selected as a member of the project’s Youth Peace and Mediation Committee, charged with confronting and resolving conflict in the community. Michel took the role very seriously, “When you have a responsibility, you try to be a mirror for others.”

Michel’s transformation was so dramatic it left some confused. Michel explained, “Everyone was surprised by the way in which I began to behave. Certain people thought I had a problem. One day, the party representative of CNDD-FDD called me and asked me ‘As you have changed so much, do you have a problem or something?’”

Fortunately, this confusion soon gave way to respect. Michel explained his new role to the party representative who then congratulated and encouraged him. Michel’s involvement with Bumbatira Amahoro has helped him to truly transform his role in his community. In recognition of this personal change Michel was named communal social adviser. In this role, he will continue to reinforce the non-violent approaches he has learned in Bumbatira Amahoro, creating a lasting impact in the community.