Since June 2014, AOAV and our local partners have implemented the Abunzubumwe (“Youth United”) project in two communes (districts) just outside of the Burundian capital, Bujumbura. This project, currently financed by the German Federal Foreign Office via the Institut für Auslandsbeziehungen (ifa), seeks to prevent youth involvement in violence through a holistic approach that addresses three primary causes of such activity: unemployment and poverty, intolerance of political difference, and psychological problems linked to trauma. 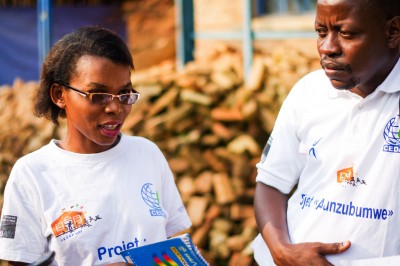 When a house in Buzige colline was set ablaze by protesters in May, residents feared that the flames could ignite wider conflict in their community. The arsonists, who were protesting the candidacy of President Pierre Nkurunziza for a controversial third term in office, suspected that the house belonged to a government agent. While it is unclear if their suspicion was well founded, this case was representative of the widespread distrust between Burundians supporting and opposing a third term for Nkurunziza, and the violence such distrust too often leads to.

Buzige is a village located in the hills of Bujumbura Rural province, just outside Burundi’s capital. Although protests opposing the president’s third term have been concentrated in Bujumbura, unrest has also spread to the hills outside the city, where the opposition FNL[1] party has a strong presence. Frustrated by the government crackdown on their fellow protestors in the city and fearing the same in their own communities, anti-Nkurunziza youth in the hills have at times targeted suspected government collaborators or members of the ruling CNDD-FDD[2] party. Elsewhere, ruling party youth have committed similar acts of violence against supporters of the opposition.

Community leaders in Buzige realized quickly that there was an urgent need to step in to control the rising tensions and prevent the situation from deteriorating. One of those, Inès, is a leader of a local group of youth organized by Abunzubumwe (“Youth United”), a project implemented by AOAV in collaboration with local partners CEDAC[3], AEOEP[4], and Vivo International, and with financing from the German Federal Foreign Office via the Institut für Auslandsbeziehungen (ifa). The project’s 500 direct beneficiaries are all members of groups like Inès’, each including a diverse mix of youth from different political parties. Based around a Savings and Internal Lending Community (SILC) model, the group members pool their resources to start projects and create livelihoods for themselves and others. In addition to entrepreneurship coaching, they receive psychosocial support and training on peaceful conflict resolution. These groups are located across Bujumbura Rural, historically a bellwether of conflict in Burundi where resolving one conflict could mean preventing a domino effect throughout the country.

“In order to encourage the kind of understanding that brought about the return to calm,” Inès recalls, “we organized individual conversations as well as group dialogue sessions in which we discussed the role of the residents of Buzige in national politics, the interests we needed to protect, and the ambitions and concerns of each of us in light of the current situation.” After the exchanges, she says, “we concluded that it is in everyone’s interest to maintain peace in the community because it is the common inheritance that belongs to us all.”

Muyira, the administrative center just a 15-minute walk from Buzige, saw several anti-third term protests after the announcement of Nkurunziza’s candidacy in late April. But there, too, members of the local Abunzubumwe group applied the conflict resolution and nonviolent communication skills they have learned to ensure that the demonstrations remained peaceful. “Certainly, some members of the groups created by the Abunzubumwe project participated actively and peacefully in the demonstrations,” related Oswald, a group member from Muyira. Fortunately, as his fellow group member Josiane explained, “each time that there were protesters who threatened to incite others to violence, there were always other protesters present to say no to foolish acts that could plunge the country back into chaos.”

With the recent reelection of Nkurunziza in an election boycotted by the opposition, Burundi’s political crisis is far from over. Whatever the coming months may bring, youth like Inès, Oswald and Josiane will continue to play an essential role in preventing conflict not only in their groups, but in their communities as a whole.