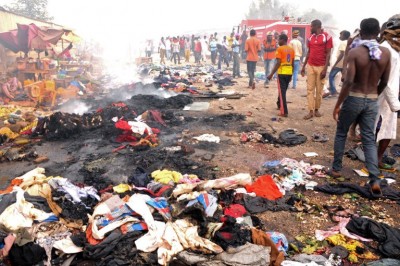 The aftermath of a suicide attack in Jos, Nigeria.

A quadruple suicide attack yesterday show yet another side to the havoc being wreaked by Boko Haram in West Africa.

Four suicide bombers attacked two locations in the capital of Chad, N’Djamena, in the first suicide attack to be recorded in the country. The attacks, which the Chadian government has blamed on Boko Haram, killed at least 23 people and injured a further 100. Although the bombings took place outside the national police academy and at the office of the police chief, the attack took place in the populated heart of the city reports say that the powerful explosions killed civilian passers-by as well as those inside the buildings.

This is the first incident of explosive violence that AOAV has ever recorded in Chad, and signifies a potentially alarming escalation in the increasingly transnational spread of Boko Haram in West Africa. The attack, if confirmed as being carried out by Boko Haram, is the first suicide bombing carried out by the militant group in an African capital city outside Nigeria. And while Boko Haram gunmen have targeted villages on the Chadian border with Nigeria in the early months of 2015, Monday’s attack is the first time the group has been recorded as using explosive weapons in the country.

Chad has been instrumental in breaking Boko Haram’s control of huge areas of north-eastern Nigeria, but this has led the group to retaliate. The leader of Boko Haram, Abubakar Shekau has declared ‘war’ on Chadian president Idriss Deby. In the aftermath of yesterday’s attacks however, the Chad’s information minister Hassan Sylla Bakari said that the group had “made a mistake targeting Chad,” and that they would be “neutralised” 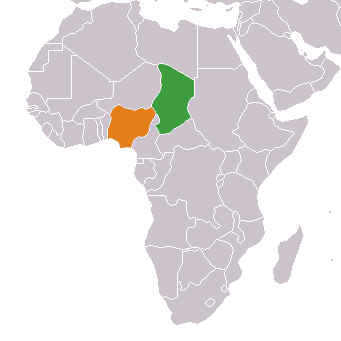 Chad has one of the most effective armies in West Africa, and a 20,000-strong state force has intervened in both Nigeria and Cameroon to fight Boko Haram. A 3,000-strong French mission is also based in N’Djamena to help fight militancy in the region. In the wake of the attack large numbers of troops have been patrolling the capital city’s streets, and cars with tinted windows have been banned.

The use of suicide attacks in Chad by Boko Haram is yet another development in their use of this extremely destructive tactic. Neither AOAV nor the Suicide Attack Database have ever recorded a suicide attack in the country before, and Monday’s attack resulted in a high number of casualties.
Suicide attacks in Nigeria have resulted in a high number of civilian deaths and injuries already in 2015. From January to April 2015, AOAV recoded 28 incidents of IED use in Nigeria, 21 of which were suicide attacks. From these 21 attacks, 667 civilians were killed or injured. While only seven of the IED incidents were explicitly reported as being carried out by Boko Haram, the majority of them are reported as bearing the hallmarks of the militant group. In addition to being highly deadly attacks, Boko Haram has been reportedly using children to carry out suicide attacks. They are being coerced, manipulated or forced into carrying out attacks that will likely lead to their own deaths and the deaths of others, and this practice must be completely condemned.

The rise of suicide bombing as a tactic of IED use in Nigeria is one which causing some of the most destructive and deadly attacks recorded by AOAV. Attacks which deliberately target civilians, or are indiscriminate in their nature, are illegal under international humanitarian law. AOAV calls on states to do all in their power to undermine and restrict the availability of IED materials to prevent such future attacks, and urges all users of explosive weapons, including IEDs, to stop the use of such weapons in populated areas.