The violence which plagued Nigeria in 2014 has continued into 2015 in shocking fashion and with devastating effects. The first 11 days of this year saw some of the worst attacks since 2009, when militant group Boko Haram began its violent quest to establish an Islamic caliphate in Nigeria.

Amnesty International reported that up to 2,000 people were killed by Boko Haram on 3 January in Baga, northern Nigeria, though the lack of witnesses and scale of destruction makes it hard to know the exact death toll at the time of writing. The deadliest attack in the group’s history marks a bloody beginning to a year in which general elections are due to take place, although some have suggested that the increasing violence in Northeast Nigeria will make polling almost impossible in some areas.

January 2015 has also seen a continuation in a particularly disturbing and destructive new tactic employed by Boko Harm: the use of children to carry out ‘suicide’ attacks.

On 11 January this year, two suspected 10-year-old girls “with plaited hair” walked into a market in Potiskum, Northeast Nigeria, and detonated explosives. At least other four people were killed and more than 40 wounded in this attack. 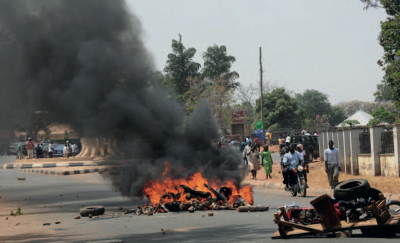 The aftermath of an IED attack.

Only the day before, on 10 January, a bomb strapped to a girl exploded in the beleaguered town of Maiduguri, Borno state. At least 19 people were killed and more than 20 injured when the explosive device detonated as the girl was searched at the entrance to a market. Ashiru Mustapha, a ‘civilian vigilante’ who witnessed the incident said: “the girl was about 10 years old and I doubt if she actually knew what was strapped to her body. In fact, she was searched at the entrance to the market and the metal detector indicated that she was carrying something. But sadly, the explosion went off before she was isolated.” There seems to be little doubt that the explosive device was being carried by a child, with reports all stating that hospital officials and witnesses had identified a 10-year-old girl.

These two attacks appear to be the latest in a string of incidents which show Boko Haram’s willingness to utilize children to cause death and destruction, and to turn them into “human bombs.” In November 2014, two explosive devices were detonated by “girls dressed in full hijabs” in Maiduguri, killing at least 30 people. The second device was detonated as people gathered to help those killed and injured in the first explosion.

The pattern of bombing markets in Nigeria appears to be worsening. AOAV has recorded the impact of explosive violence worldwide since 2011. From 2011-2013 we saw markets bombed in 25 countries and territories. Nigeria saw six separate attacks in that time, a total almost surpassed in the last three months alone.

Children in Nigeria are all too often the victims of explosive violence. In November 2014 a suicide attacker disguised as a student killed almost 50 students at a school in northern Nigeria. Nearly 80 were wounded when an explosive device was detonated during morning assembly at the school.

Boko Haram has both targeted and used children to perpetrate violence in the past. During one of the deadliest recent attacks, where at least 142 people were killed in Benisheikh, witnesses saw children carrying AK47 rifles. “Boko Haram’s tactics are the most profane acts we can imagine,” said Daniel Bekele, Africa director at Human Rights Watch, in 2013, “…the use of children for fighting [are] horrifying human rights violations.”

The most recent attacks in Nigeria show the increasingly demonic tactics of Boko Haram, but they also highlight the impossible situation faced by civilians and security teams in Nigeria. The use of children, especially girls in hijabs, for the perpetration of improvised explosive device (IED) attacks increases the sense of fear and threat in communities such as those struck by the attacks at the weekend.

It also exposes the challenges inherent in the term ‘suicide bombing’. AOAV has long challenged the suitability of this term. Children may be coerced or threatened into action, as was the case for 13-year-old Zarau Babangida, who was sold to Boko Haram by her parents. They may not even know they are carrying explosives at all, as was reported in Maiduguri. So-called suicide attacks may be triggered remotely against the will or knowledge of the ‘bomber’, or may involve the coercion or manipulation of otherwise vulnerable people. AOAV believe the term ‘suicide bomber’ overstates the responsibility and agency of the reported attacker, and otherwise diverts attention from the victims.

AOAV strongly condemns the use of children in hostilities, both as targets and as perpetrators. AOAV is leading civil society efforts to recognise, stigmatise and challenge the threat from IEDs and other explosive weapons. More can and should be done to tackle the impact of these weapons, from the closer regulation of source materials, to the accurate recording of the casualties of these weapons and the provision of full assistance to the victims.

To find about more about AOAV’s work on IEDs see: IEDs and suicide bombings