As Figure 6 shows, in 2014 when explosive weapons were used in populated areas, 92% of the casualties (people killed and physically injured) were reported to be civilians. This compares to 34% in other areas.

This is clearly a predictable pattern of harm. It is therefore preventable, and yet state and non-state actors alike repeatedly deployed explosive weapons in populated areas during 2014.

Two-thirds of the total incidents that AOAV recorded in 2014 were in areas reported to be populated (1,776 incidents, or 66%). The percentage of civilian casualties taking place in populated incidents was, however, 88% (29,242 civilian deaths and injuries), demonstrating the heightened impact of explosive weapon incidents in populated areas.

AOAV recorded an average of 16 civilian casualties per incident of explosive weapon use in populated areas, compared to just four in other areas.

Bombed as they shop

As Figure 7 shows, aside from incidents where multiple urban locations were attacked, markets were one of the most dangerous places for civilians to be in 2014. AOAV documented 4,147 civilian deaths and injuries in markets, an increase of 15% from 2013. Civilians made up 98% of all the casualties that were reported in markets, souks and bazaars around the world. Markets were bombed in 14 countries. Half the attacks recorded in markets took place in Iraq, where 1,862 civilian casualties were reported.

AOAV recorded 138 attacks in markets, and while these attacks accounted for 5% of global incidents of explosive violence, they resulted in a particularly high number of civilian casualties. On average of 30 civilian casualties occurred in each attack on a market, the highest of any location type other than public gatherings (33).

One of the worst market attacks took place on 9 April, when a powerful IED exploded in a crowded market in the Pakistani capital city Islamabad. At least 23 people died and another 120 were wounded. Police said around 2,000 people had been in the fruit and vegetable market at the time of the attack.[i]

Bombed in their homes

Civilians were not safe from explosive weapons in their own homes last year. The number of attacks recorded among civilian houses and residential neighbourhoods increased by 94% in 2014.[ii] Civilian casualties also dramatically increased by 43%, from 2,468 deaths and injuries in 2013 to 3,521. While Gaza, Syria, and Iraq were the most impacted by these incidents, an attack on an urban residential location occurred in 28 countries across the globe.[iii] In contrast to markets, nearly all incidents and casualties in residential neighbourhoods were caused by weapons launched from the air (87%).

Simply targeting armed actors with explosive weapons did not prevent civilians from being killed or injured. Civilians still made up 38% of casualties in incidents where armed actors were the clearly reported targets in 2014. In populated areas this rose to 68%, while in non-populated areas like agricultural and rural land civilians made up only 12% of recorded casualties.

The use of explosive weapons that impact on a wide area particularly endangers civilians, even if these weapons are directed at a military objective.

The danger posed to civilians can be clearly seen in the targeting of ISIS. On 2 July the Iraq government helicopters targeted a municipal building in the town of Shirqat that had been taken over by militant fighters. The air strikes hit not only the intended target but also nearby houses. At least 18 civilians were killed, including eight people from a single family. The bombings completely destroyed five civilian homes.[iv]  In this strike no armed actor casualties were reported to have occurred.

It is not only airstrikes targeting non-state armed actors which impacted civilians in 2014. IEDs targeting armed actors in populated areas also pose a threat to civilians. The United Nations in Afghanistan documented a 38% rise in civilian casualties from IED attacks that were targeted at the Afghan National Army.[v] On 11 May, five civilians were killed and 40 injured when a Taliban suicide bomber targeted an army vehicle in front of a hospital in Kandahar.[vi]

The majority of media sources did not include reporting of the age or gender of any victims in 2014.

Women were reported among the casualties in 15% of incidents of explosive violence.[vii] Adult female casualties were recorded in 32 countries in 2014, with a total of 982 women being reported as killed or injured.[viii]

Additionally, often where attacks result in child casualties, reports do not mention a specific number of casualties.[ix] From the sample of incidents where the age of at least one casualty was reported, children made up 17% of explosive violence casualties in 2014.

Of the attacks where a child casualty was reported, 86% (435 of 506 incidents) took place in a populated area. AOAV recorded 166 separate incidents where children were killed or injured by explosive weapons in their family homes. Air strikes were particularly dangerous for children, with 44% of all deaths and injuries being reported as caused by air launched explosive weapons.

One such attack came on 29 July in Gaza. At least 18 children died and another four were critically injured when a single 2,000lb aerial bomb fell on an apartment block in the city of Khan Younis. The building, which was completely destroyed, had been home to three families.[x]

Beyond the threat of immediate death and injury, explosive violence has particular long-term impacts on women and children.[xi] More research is needed to understand and respond to these negative effects of explosive weapons. 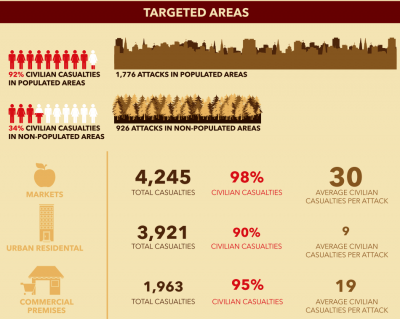 [vii] This number reflects only attacks in which at least one female casualty was numbered in media reporting. In addition there was a further 47 incidents where women are reported among the casualties without a number provided by the sources.

[ix] In 53 incidents in 2014 children were reported as among the casualties, but no number was provided.