“Ultimately, civilians in Syria, Gaza, Israel, Afghanistan, Libya, eastern Ukraine and other conflict hotspots pay the price when the shells aimed at military targets end up hitting homes, hospitals and schools. This simply has to stop. These explosive weapons are designed for open battlefields, not built-up urban areas […] This is not about the weapons themselves – it’s about where and how they are used.”

For four years AOAV has tracked the use of explosive weapons around the world. Since 2011, almost 150,000 people have been reported killed or injured by weapons like rockets, mortars and car bombs.

Year on year, the casualty toll has mounted with 2014 being the worst that AOAV has recorded so far. Civilian casualties from explosive weapons are now 52% higher than 2011 levels.

Explosive violence worsened in its spread and severity in 2014. Civilian deaths and injuries from these weapons increased by 5% from 2013. Every day in 2014 there was an average of 90 civilian casualties, including 29 civilians who died daily at the hands of these weapons.

Civilians continue to bear the burden of explosive violence. In total AOAV recorded 41,847 deaths and injuries in 2014, 78% of whom were civilians. Civilians were killed and wounded as they slept, shopped, worshipped or travelled.

In Explosive States, AOAV explores the countries and contexts where civilians were most at risk from the use of explosive weapons. More than 50 different countries saw casualties last year, places as diverse as Ukraine, India and the Central African Republic.

For the second year running, Iraq and Syria were the two countries with the highest numbers of civilian casualties from explosive violence. The suffering of civilians in these countries was compounded by new crises in 2014. Desperate humanitarian emergencies have emerged from the widespread use of explosive weapons in populated areas in Gaza, Ukraine and Nigeria.

“It took 40 minutes but it felt a lifetime. I lived all my life in the house my father built. It was our corner of paradise, our ‘swallow’s nest’. Now it is destroyed. I’ve no idea what will come next.”

One consistent pattern endures throughout the years AOAV has been tracking explosive violence. When these weapons are used in populated areas, they massively elevate the threat to civilians. Even when explosive weapons were targeted at a military objective in 2014, their wide-area effect often meant that bystanders were caught by the blast or hit by projected fragments. The grim reality is that civilians in countries around the world cannot feel safe even in their own homes.

The wide-area effects of some explosive weapons have been of concerning prominence in 2014. Multiple rocket launchers, a devastating feature of the Syrian war in previous years, were used by competing parties to pummel eastern villages and towns in Ukraine. These weapons, like the notorious Grad, launch a barrage of unguided munitions in the space of seconds, covering a wide area.

They clearly have no place being used in places where civilians are concentrated. Yet they, and other equally terrible weaponry, were often the drivers of civilian harm in markets, schools, neighbourhoods and places of worship in 2014.

Crucially, AOAV’s data can only ever show part of the picture of this civilian harm. It tries to capture some of the immediate effects, the deaths and the physical injuries. It cannot touch upon the destruction of homes or a lifetime of possessions. It cannot understand the psychological suffering inflicted, or the life-changing economic deprivation that can follow an explosive. Many more people are affected by explosive weapons than can possibly be hinted at in these casualty figures.[iii]

AOAV’s data is not an attempt to capture every casualty of every incident around the world. No claims are made that this sample of data, taken from English-language media reporting, can represent the total impact of explosive weapons on civilians in 2014.

The last twelve months has seen explosive weapons, both manufactured and improvised, bring appalling suffering to civilians across the world. Explosive States shows the urgent need for action to combat and reduce the harm these weapons continue to cause. 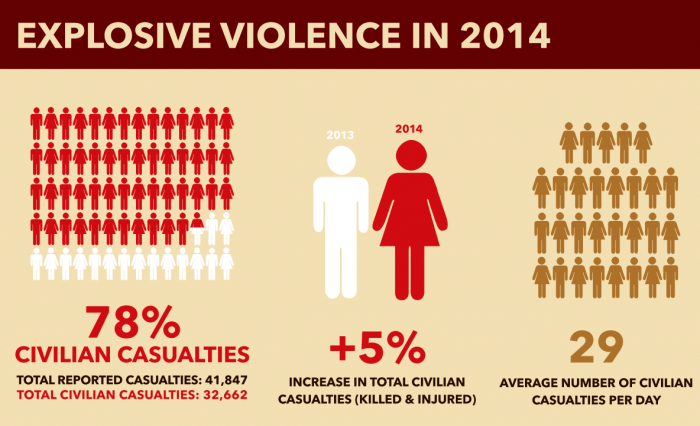 There was a 5% rise in the number of civilian casualties and an 11% rise in incidents involving explosive weapons in 2014 compared to 2013. 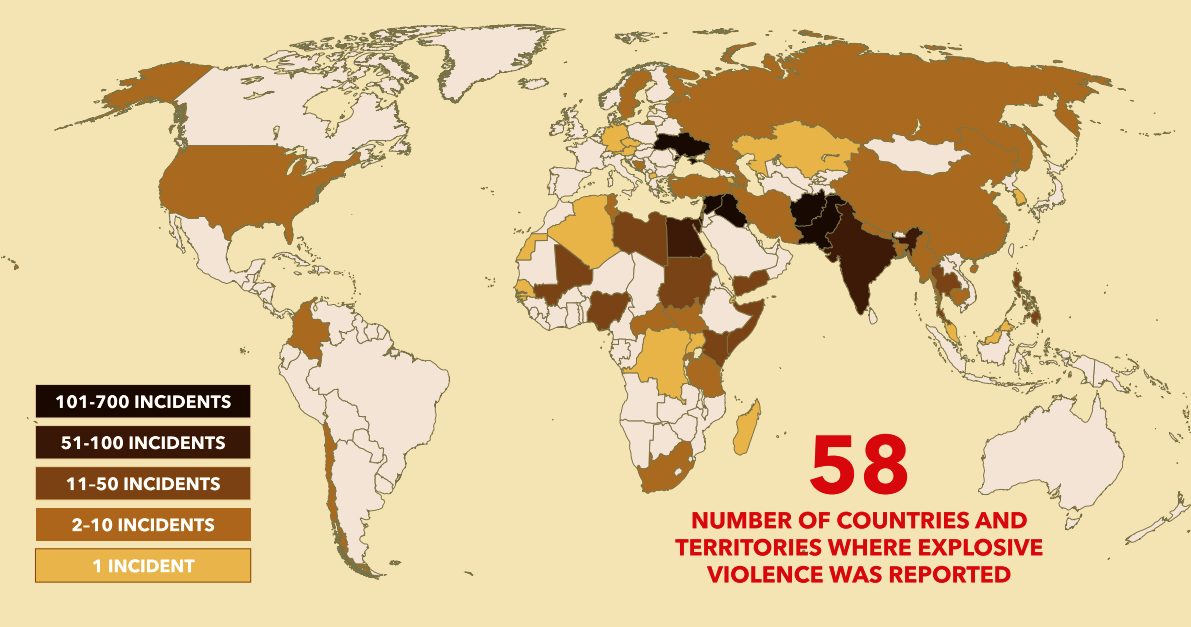 [i] “ICRC alarmed over unacceptable use of explosive weapons in urban areas,” International Committee of the Red Cross, 13 October 2014, www.icrc.org/en/document/weapons (accessed 22 May 2015).

[iii] For more on the longer-lasting impacts of explosive weapons see, among others, Jane Hunter, “Blood on the streets of Boston,” Action on Armed Violence, December 2014, https://aoav.org.uk/wp-content/uploads/2015/03/blood_on_the_streets_of_boston2-2.pdf (accessed 26 May 2015), Robert Perkins, “Syria’s shockwaves,” Action on Armed Violence, December 2013, https://aoav.org.uk/wp-content/uploads/2014/04/Syrias-shockwaves-the-consequences-of-explosive-violence-for-Syrian-refugees.pdf (accessed 26 May 2014).