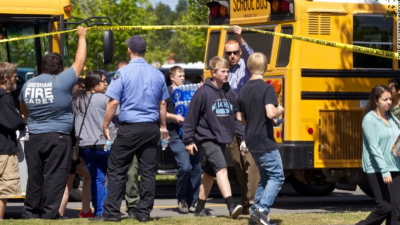 Oregon – yet another mass shooting in the US

‘There’s another community stunned with grief,’ said a weary Barack Obama last night in the wake of the yet another mass shooting in the US.

The US is by far the world leader among developed nations for mass shootings
It should, perhaps, have not been a surprise to him that this was something his role, as President, would necessitate. After all, the news site Mother Jones tracked and mapped American shooting sprees over the three decades from 1982 to May of 2014, and counted ‘at least 61 mass murders carried out with firearms across the country, with the killings unfolding in 30 states from Massachusetts to Hawaii.’ These findings were not far off a Congressional Research Service report published in 2013.  It counted 78 incidents over roughly the same period, in which 547 people were killed.

There are more mass shootings and they are getting deadlier
Certainly the number of shootings that President Obama would have to talk about may be more than he had evera anticipated. A report published by the FBI last year, studying active shooting situations between 2000 and 2013, found that such gun massacres were happening more and more recently in the US. The first seven years of the study found an average of 6.4 active shootings per year, while the last seven years of the study found that number jumped up to 16.4 incidents per year.

Not only are they getting more frequent, they are also getting more violent. Of the 12 deadliest shootings in the United States, at least half happened after 2007 – including the massacres at Sandy Hook Elementary School in Newtown, Conn. and at Virginia Polytechnic Institute and State University in Blacksburg.

More guns surely equals more gun deaths
Despite this the US is the only country in the world that has relaxed gun laws following a gun massacre, not tightened them.  This, even in the face of an assessment by the Harvard Injury Control Research Center on guns and homicide that found there’s substantial evidence that indicates more guns means more murders. This holds true whether you’re looking at different countries or different states – the figures of which can be seen here.

And the fact that, in 2011, an American economist Richard Florida dug deep into the correlations between gun deaths and things such as higher populations, more stress, more immigrants, and more mental illness.  Interestingly, these were not correlated with more deaths from gun violence. But one thing he found was: that States with tighter gun control laws appear to have fewer gun-related deaths. Of course, correlation cannot prove causation, but correlations can be suggestive.

US support for gun control declining not increasing
Despite all of this evidence, though, Americans have not come, increasingly, to believe that gun control laws should be stricter.  ‘Less than half of Americans, 47%, say they favor stricter laws covering the sale of firearms, similar to views found last year,’ Gallup says. ‘But this percentage is significantly below the 58% recorded in 2012 after the school shooting in Newtown, Connecticut, spurred a nationwide debate about the possibility of more stringent gun control laws. Thirty-eight percent of Americans say these laws should be kept as they are now, and 14% say they should be made less strict.’

In fact, the Pew Research Center found that shootings don’t tend to substantially affect views on gun control, after polling Americans after mass shootings in the United States. In fact, Pew reported late last year that for the first in more than 20 years, Americans showed more support for gun rights than gun control.

The thing, perhaps, that is lacking in the US debate about guns are hard statistics.

Hard facts about the US and its guns
Between 2004 and 2013, according to my own research into 10 years of gun data, the US Bureau of Justice records that over 4.5 million people were the victims of gun crime in the United States. Of these, the FBI reports that almost 95,000 were homicides. This was over five times the number of knife murders.

The FBI data also shows that between 2004 and 2013, 66 children under the age of 1 were shot and killed in the US. A further 363 children between the ages of 1 and 4 died from a gunshot wound. In total, in that decade, 4,207 American children 16 or younger were killed from guns.

This is not all. Just under a million people were shot and survived. If you are American then I am sure you know of someone who has been shot. If you are British, the chances are you don’t.

There are other, terribly personal moments of gun horror that unfolded in that decade. Over 185,000 Americans shot and killed themselves – deaths that never make the global news.

Such violent death and injury has been fuelled, without question, by America’s love for the gun, and the profits that such a love brings. In that decade the US imported over $10 billion of arms and ammunition and exported about $5 billion worth. It’s a love of the gun that has also been sanctioned by the US government on all levels. The Department of Defence spent nearly $11.5 billion dollars on guns and ammunition between 2004 and 2013. So large is that number that it is perhaps worth me writing out that exact amount in full. $11,446,197,397. Just on guns and bullets.

The upshot of all of this is that the Oregon shootings are just part of a much wider and terrible reality in the US – that no matter how many people are killed or wounded by guns in the US, the public appetite for deep and formative gun law change is not increasing.

And so it is that we need to be resigned to the truth that we will see the US President again, soon, talking about yet another American community destroyed by guns.