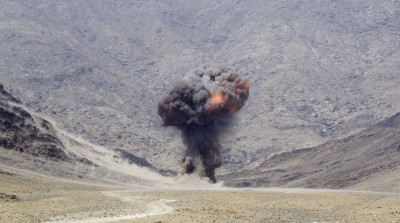 A suicide attack on a NATO convoy in Afghanistan on Tuesday 30 June killed one civilian, injuring at least 19 more, as well as injuring two coalition troops. The attack in Kabul, which has been claimed by the Taliban, shows an increasing instability in the region, with a number of attacks on high profile targets in recent weeks.

Tuesday’s attack is the second major IED attack in Kabul since the start of Ramadan, with the militant group rejecting a ceasefire request from Afghanistan’s Ulema council. Last week the Afghan parliament was targeted by a car bomb and suicide bomb as lawmakers were voting on a new defense minister.

The danger felt by civilians due to suicide attacks, even when they target non-civilian targets, is evident in the recent attacks in Afghanistan. Of the more than 20 people killed and injured in Tuesday’s attack, all but two were civilian. Too often civilian men, women and children feel the impacts of IED attacks most acutely.

The bombing was planned during one of the busiest periods of the day, as people left work. As the attack took place, hundreds of civilians flooded onto the busy main road that links the city center to the international airport. Even when targeted at a specific military objective, attacks with explosive weapons often kill and injure bystanders in the surrounding area. Globally in 2014, civilians made up 68% of casualties when explosive weapons were aimed at military targets in populated areas, but just 12% in other areas. Tuesday’s attack is further proof of a devastating pattern of harm.

NATO ended its combat mission in Afghanistan last December, and only a small contingent currently remains in the country to train Afghan security forces. Violence in Afghanistan has increased since NATO left the country, with the UN recording 1,800 civilian casualties in the first three months of 2015 alone.

Afghanistan has been plagued by violence for years. Between 2011 and 2014, AOAV recorded nearly 8,700 civilian casualties of explosive weapons such as car bombs and roadside bombs in the country. The number of civilian casualties in 2013 and 2014 was markedly less than the numbers in 2011 and 2012, yet the first few months of 2015 suggest that violence may be increasing again.

AOAV has carried out research into the humanitarian impact of IEDs in Afghanistan, and efforts being taken by the United Nations Assistance Mission in Afghanistan. This research can be read in our report Tracking IED Harm. These weapons have caused devastation across Afghanistan, particularly when they are used in populated areas. Their indiscriminate nature means that, even when used to target security and military targets, their impacts are likely to be felt by civilians.

AOAV condemns the use of such weapons. Attacks which deliberately target civilians, or are indiscriminate in their nature, are illegal. AOAV calls on states to do all in their power to undermine and restrict the availability of IED materials to prevent such future attacks, and urges all users of explosive weapons, including IEDs, to stop the use of such weapons in populated areas.