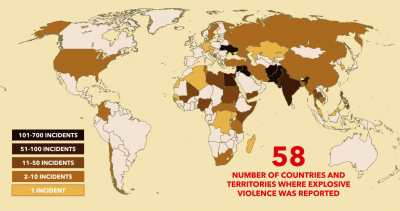 Explosive weapons have caused devastation across the globe.

The use of children as suicide bombers was today debated by MPs in Westminster Hall, with calls for the Government to provide funding for research into the motivations and humanitarian impacts of suicide bombing more generally, and a plea to ensure that unaccompanied minor refugees are given safe haven in the UK.

Roger Mullen, an SNP MP for Kirkcaldy and Cowdenbeath, moved the debate, using research carried out by AOAV and UNICEF to highlight the increasing use of suicide attacks globally. He noted that more than 5,000 civilians were killed and injured in such attacks in the first seven months of 2015. This represents a dramatic 45% increase from the same period in 2014.

In an informed debate, a number of MPs spoke of the harm being caused by these often indiscriminate bombings in countries such as Iraq, Syria, and Nigeria. The targeting of civilians in urban areas was highlighted, an aspect of harm which is particularly notable after a weekend which saw a huge suicide attack at a peace rally in Turkey, and a quintuple suicide attack in Chad. And while the use of suicide bombing more generally as a tactic was discussed, the debate highlighted the shocking use of children as perpetrators of such attacks. Reports by the Iraq Independent Human Rights Commission and the UN Human Rights Council were highlighted, with figures such as the reported training of 1,000 children as suicide bombers in Iraq since November 2014 being used to demonstrate the increasing use of children as “instruments of conflict.”

Islamic States’ and Boko Harams’ use of children in suicide attacks was noted, in particular the use by Boko Haram of girls as young as the age of seven. As David Hanson MP (Labour) stated, such use is “chilling [and] horrendous” and the UK government must take steps to stop it.

It was recognised by Patrick Grady MP (SNP) that the use of children in armed conflict violates international humanitarian law, and that the Rome Statute of the International Criminal Court prescribes such action as a war crime. It was therefore suggested that the UK government assist in efforts to prosecute those responsible for the training and use of children as suicide bombers. Crucially, it was emphasised that primarily children should be regarded as not simply perpetrators, but as victims.

Importantly, a number of recommendations were put forward to Tobias Ellwood of the Foreign Commonwealth Office. These include: 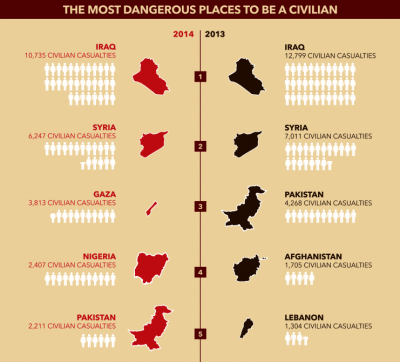 AOAV data shows the most dangerous place to be a civilian in 2014.

Please click on the following links to read more about AOAV’s policy on the use of explosive weapons and IEDs.