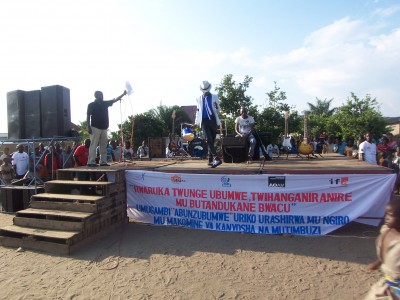 A musician takes the stage at a Peace Music Event, on the grounds of the Kinyinya Primary School in Mutimbuzi commune. The event featured popular local music and dance groups, as well as skits by project beneficiaries, promoting peace during this crucial period in Burundi.

It is a truism that youth are a country’s future. But in Burundi, where 65 percent of the population is under the age of 25, it could equally be said that youth have a major role to play in the present. This central African country, which emerged just a decade ago from a long and bloody civil war, has recently seen tensions rise again in an electoral period marred by violence and fear, as youth protesting President Pierre Nkurunziza’s bid for a controversial third term in office have clashed with youth supporters of the President and the security forces. A proliferation of rumors fuels fear and tension, and risks widening already vast political divisions.

While Burundi’s youth have historically been manipulated into violence in the interest of elites, they also hold the key to peace. In this critical period, bringing communities together to bridge those divides can make a difference by preventing conflicts that could otherwise cause a domino effect throughout the country. To this end, AOAV recently organized a concert in Mutimbuzi commune, an area just outside of the capital, Bujumbura, which has historically been a hotspot for political violence. The event, which drew a crowd of approximately 1,270, brought together youth as well as leaders of political party youth wings, local elected officials, and other influential figures who called for peace during this tense period. 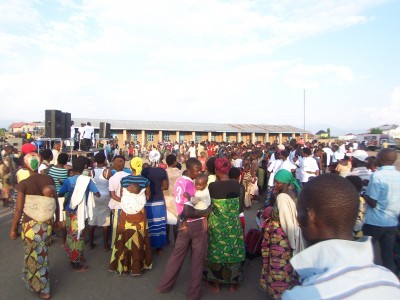 A crowd gathers around the stage at the Peace Music Event which brought together some 1,270 community members, elected officials and local leaders, youth from different political parties, and more.

The event was part of Abunzubumwe (“Youth United”), a project implemented by AOAV with financing from the German Federal Foreign Office via the Institut für Auslandsbeziehungen (ifa), in collaboration with local partners CEDAC, AEOEP, and Vivo International. The project seeks to prevent youth involvement in violence through a holistic approach that addresses three primary causes of such activity: unemployment and poverty, intolerance of political difference, and psychological problems linked to trauma. The project’s 500 direct beneficiaries — including ex-combatants, members of political youth leagues, and other vulnerable youth — work together across political divides on entrepreneurship projects, are trained in conflict resolution strategies, and receive psychosocial support.

2015 is proving to be a pivotal year for Burundi, and the country’s youth are playing a critical role in deciding the outcome of the current political crisis. Surveyed by CEDAC staff, attendees of the recent concert emphasized the importance of such events to bring people together and highlight commonalities during this tense period. By transcending political boundaries and working together to improve their lives today, the youth of Burundi can also make their country a better place to live for future generations.