New research by London-based NGO, Action on Armed Violence (AOAV), has revealed that recent changes to Israel’s military rules of engagement have increased the risk to civilians in Gaza.

In “Under Fire,” AOAV scrutinised the rules that dictate how and where the Israel Defense Force (IDF) have used explosive weapons since 2005, the year the IDF withdrew from the Gaza strip. AOAV examined claims made by Israeli officials that the IDF have made great strides in improving the protection of civilians from the wide-area effect of their artillery shells.

Artillery is often referred to as a ‘statistical weapon’ by Israeli military experts. This term captures the inherent inaccuracy of an explosive weapon that fires multiple numbers of heavy, unguided shells. The use of this weapon in and near populated areas puts civilians at grave risk of death and injury.

AOAV’s findings show, however, that rather than reducing the risk of civilians dying from Israeli explosive weapons, the IDF’s previously quite strict rules regulating artillery practice have been relaxed since 2005. Civilians are now more at risk from Israeli artillery shelling than before 2005.

The report found that despite a stated commitment by the IDF to civilian protection, and much advertised measures such as pre-strike warnings, when it comes to the use of Israeli artillery on Palestinians there is a wide gap between public rhetoric and the reality on the ground. 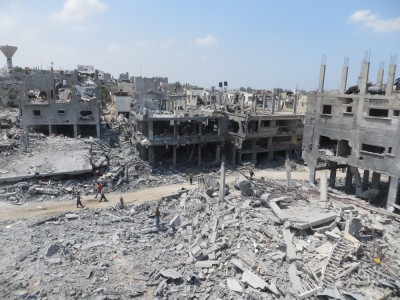 The most substantive measure taken to protect civilians from artillery came in December 2006, when the IDF imposed a moratorium on artillery shelling in Gaza. This remains the only policy to have seen a clear and measurable improvement in civilian protection from artillery shells, but after 2008 this measure fell into disuse.

“Unguided artillery shells are a relic of a bygone day, but our report shows that if anything the IDF is more reliant on them now than they were almost a decade ago,” said Iain Overton, AOAV’s Director of Policy. “There’s no reason why Israel can’t stop using such damaging weaponry in populated areas.”

“In recent years the IDF has shifted away from using other devastating weapons like multiple rocket launchers or globally-banned cluster bombs,” said Robert Perkins, Senior Researcher at AOAV. “It doesn’t seem like this shift has extended to unguided heavy artillery, but these wide-area effect explosive weapons have no place in an urban populated area, where their effects cannot be controlled.”

The full report can be downloaded here:

The infographic accompanying the report can be found here:

This report is one of three reports published by AOAV looking at the issue of escalation of force in the use of explosive weapons in populated areas.  These three reports are:

Under Fire – scrutinising the rules that dictate how and where the Israel Defense Force (IDF) have used explosive weapons since 2005.

Air Power in Afghanistan – this investigates how NATO changed the rules for its use of aerial explosive weapons in populated areas in Afghanistan from 2008 through to 2014.

A Tale of Two Cities – AOAV investigated the conduct of British forces in Basra (2003) and American forces in Fallujah (2004) to see how the US and the UK’s respective rules of engagement affected the way their militaries used explosive weapons in populated areas.