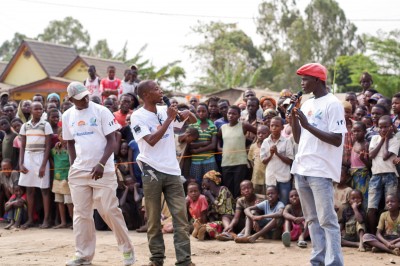 Youth involved in the Abunzubumwe project act out a sketch to send a positive message about not engaging in violence.

Burundi’s war ended nearly a decade ago but many Burundians continue to suffer the effects of the fighting – traumatised by the conflict, plagued by mental health issues including post-traumatic stress disorder (PTSD), anxiety, aggression, behavioural issues and struggling to build a positive future for themselves and their families. Individuals with mental health issues, whether developmental or the result of armed violence, remain a vulnerable population in Burundi, lack equal access to education and employment, and are often ostracized by their families and their communities. Low self-esteem and severe depression are common symptoms that can persist, or even be exacerbated unless treatment is provided. However, governments of impoverished countries like Burundi lack the resources for mental health services that wealthier governments are able to offer, and individuals can rarely afford expensive professional counselling even if it is available.

AOAV has been working with young people affected by armed violence in Burundi since 2011. Our projects have engaged particularly with those who continue to be stigmatised by their experience during the war, either because of their status as former combatants or because they have suffered some lasting physical or mental impact which has prevented them from engaging fully in society. In particular, many ex-combatants were not successfully reintegrated into civilian life after the war and remained desensitized to violence, with a significant number still suffering from the psychological consequences of the conflict. PTSD, for example, can undermine empathic abilities and trust in others, thereby militating against reconciliation, the restoration of a social contract, and peace building.  Of course, this does not apply to everyone suffering from PTSD or other trauma-related conditions, but is one factor which can mean that ex-combatants are at a higher risk of being manipulated into violence.

This year, AOAV’s Abunzubumwe project has included a specific component aimed at assisting young people struggling with trauma and other mental health issues related to armed violence. Through project activities AOAV and partners proactively identified a number of young people displaying symptoms which indicated they had been particularly affected by their experiences. Experienced local therapists then conducted diagnostic interviews with these individuals, and where necessary offered tailored psychological treatment. These therapists have worked extensively with active soldiers, former combatants and other groups affected by war and other disasters. This mental health component was part of a comprehensive approach which also addressed social and economic vulnerabilities to continued engagement in armed violence.

The importance of treatment for mental health issues stemming from armed violence became even more apparent during the course of the project which coincided with the worst outbreak of violence in Burundi since the end of the war. The crisis which resulted from the disputed third term of Burundi’s president, Pierre Nkurunziza, exacerbated an existing climate of fear and distrust, and project therapists reported a particular impact on beneficiaries with already-severe PTSD symptoms. Therapy sessions for those receiving treatment were therefore increased and close monitoring undertaken for a number of beneficiaries deemed a possible risk to themselves or others. The quick response to the escalating symptoms of these vulnerable young people was crucial in aiding their recovery but there are many more in Burundi who no doubt suffered in silence due to the stigma which surrounds mental health and the lack of services providing assistance.

Mental health issues can affect anyone at any time but those who have survived a violent experience are much more likely to be affected. On World Mental Health Day please remember that when the war is over, the news reports are elsewhere, the wounds are healed and the houses rebuilt, even decades later, there will still be people struggling with their own internal wars.