The head of the UN’s cultural heritage organisation has today issued a stinging condemnation of an aerial bombing raid which killed five people and destroyed ancient historic buildings in the heart of the Yemen capital city of Sana’a.

“I am profoundly distressed by the loss of human lives as well as by the damage inflicted on one of the world’s oldest jewels of Islamic urban landscape,” said UNESCO Director-General Irina Bokova. “I am shocked by the images of these magnificent many-storeyed tower-houses and serene gardens reduced to rubble.”

“This destruction will only exacerbate the humanitarian situation and I reiterate my call to all parties to respect and protect cultural heritage in Yemen.” 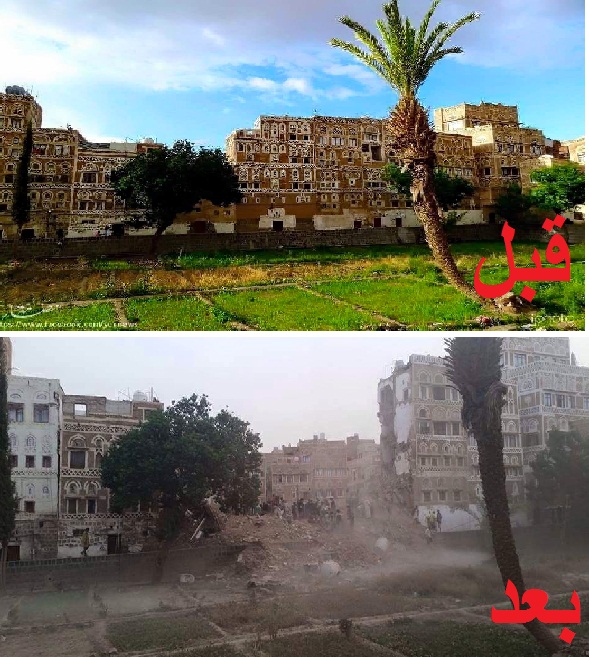 Yemen’s old city, before and after the aerial bombing on 12 June 2015 (UNESCO)

Today’s attack is the latest in an aerial bombing campaign led by Saudi Arabia in Yemen against a Shiite Houthi rebellion. The bombing, which began on 25 March, has killed and injured hundreds of Yemeni civilians and gravely threatened the country’s World Heritage sites.

In March and April alone AOAV recorded 1,135 civilian deaths and injuries from air strikes in Yemen. Of these, 239 were deaths. Yemen was the world’s worst country for civilian casualties from explosive weapons in these two months.

Most of the casualty-causing air strikes were reported in populated areas, including the capital city Sana’a. Civilians made up almost all the casualties from these attacks (96%), compared to just 12% in away from such locations.

Sana’a is home to almost two million people, as well as four World Heritage Sites. One of these is the beautiful Old City of Sana’a. This is a densely-crowded area of 103 mosques and over 6,000 houses, all built before the 11th century and dubbed the world’s oldest skyscrapers.

UNESCO calls the area “an outstanding example of a traditional, Islamic human settlement.”

It is not yet known what munition was dropped in today’s attack but the use of heavy explosive weapons in populated areas can have a devastating wide-area effect on civilian buildings. Sites of cultural heritage, though subject to special protection in international law, are no less vulnerable to the blast and fragmentation effects of heavy explosive weapons like aircraft bombs.

Explosive weapon use has been behind the loss of many unique and irreplaceable sites in recent years. The bombing campaign in Yemen alone has damaged sites in Marib and Dhamar, where 12,500 artefacts in the country’s National Museum were destroyed. Libya and Iraq also have World Heritage locations vulnerable to explosive violence impacts.

Syria, home to some of the oldest continually-inhabited cities in the world, is the most egregious recent example of the incidental destruction of world heritage with explosive weapons. The roll call of ancient sites damaged or destroyed by rockets, bombs and mortars in Syria is long. As of March last year at least 24 sites had been hit by shelling. The city of Aleppo, another World Heritage site, has been pummelled by barrel bombs, ballistic missiles, and other hugely powerful and inaccurate weaponry.

The loss of such sites is a source of collective sorrow. As UNESCO Director-General Bokova said, “This heritage [the Old City of Sana’a] bears the soul of the Yemeni people, it is a symbol of a millennial history of knowledge and it belongs to all humankind.”

Amidst the condemnation of the damage to these ancient buildings, it should not be forgotten that at least five people lost their lives. The casualties of this attack are further evidence of a predictable and terrible of pattern of harm to civilians. Globally in 2014, 92% of the casualties from explosive violence in populated areas were civilians.

But it is all humankind who loses out when sites are bombed, either through deliberate intent, ineptitude or carelessness. AOAV joins with UNESCO in condemning today’s tragic assault on our collective cultural heritage. Far more should be done to actively protect World Heritage sites from the wide-area effects of explosive weapons.