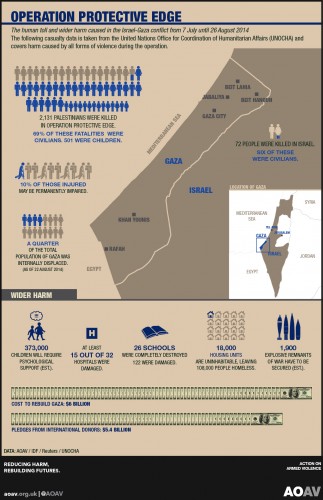 One year ago today Israel launched a ground offensive as part of its ‘Operation Protective Edge’ in Gaza. It was a dramatic escalation in the ongoing fighting, which had already seen ten days of aerial bombing. The ground offensive meant that there would now be Israeli ‘boots on the ground’ in Gaza, and that Gazan civilians would face threats from heavy artillery, tanks and mortars. These weapons would go on to cause widespread death and destruction.

Nearly a year after the fighting ended on 26 August 2014, not a single one of the almost 13,000 destroyed homes has been rebuilt, and more than 100,000 people are still displaced.

AOAV investigated the use of artillery in Gaza in 2014, asking if the rules that say how and where the Israel Defense Force (IDF) could use these weapons were too loose to effectively protect civilians on the ground. Today, AOAV looks back at the impact of the heavy artillery shelling that took place in Gaza, and asks what has since been learned about the rules of engagement that guide the use of such powerful explosive weapons in populated areas.

First, a reminder of why these questions matter.

AOAV’s monitor found that more civilians were killed and injured by explosive weapons in Gaza in 2014 than anywhere else in the world other than Iraq and Syria.

While 53% of the civilian casualties that AOAV recorded in Gaza from explosive weapons were caused by aerial bombs and missiles, much of the remaining devastation was caused by ground-launched weapons like heavy artillery shells.

Artillery weapons fire large-calibre shells from a gun or howitzer. Often these shells are filled with high-explosive. The shells are fired over long distances (the specific weapons used by Israel can launch shells up to 18km), and can be launched indirectly (i.e. without the operator needing to see the target). 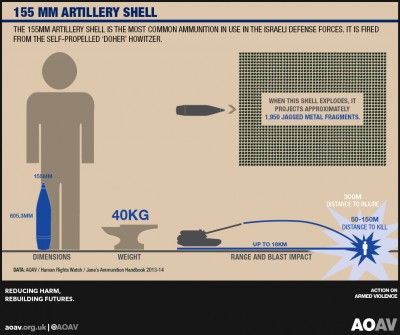 e of the IDF in Gaza, the most common ammunition is a 155mm shell, weighing 40kg and capable of projecting almost 2,000 jagged metal fragments on impact.

Almost half of the civilian casualties reported globally from artillery weapons in 2014 were recorded by AOAV as occurring in Gaza (43%). Artillery is often reported under more general descriptions (e.g. shelling), or confused with tank shelling, but AOAV recorded 734 civilian casualties from 46 incidents of shelling in Gaza in 2014. Of these casualty-causing incidents, 94% were reported in populated areas, including homes, schools and UN displacement camps.

On 22 June 2015, a new report released by a United Nations investigative panel found that there was credible evidence that war crimes had been committed in the conflict by both sides. The Commission of Inquiry focused in detail on Israel’s use of explosive weapons with wide-area effects in populated areas, including artillery.

The Commission shone light on several key aspects of the IDF’s artillery policies. It raised concerns not only with the volume of ordnance and explosive power of artillery, but also with its inherent wide-area dispersal. It said that the fact that the way in which Protective Edge was conducted was not modified after initial incidents where artillery shelling caused significant civilian casualties suggested that the way these incidents had occurred where consistent with IDF policies, not isolated and tragic examples.

Most notably, the Commission found that while the use of explosive weapons with wide-area effects in populated areas in Gaza may have amounted to war crimes, there was certainly evidence that “the use of such artillery is not appropriate in densely populated areas regardless of the legality of resorting to such weapons.” 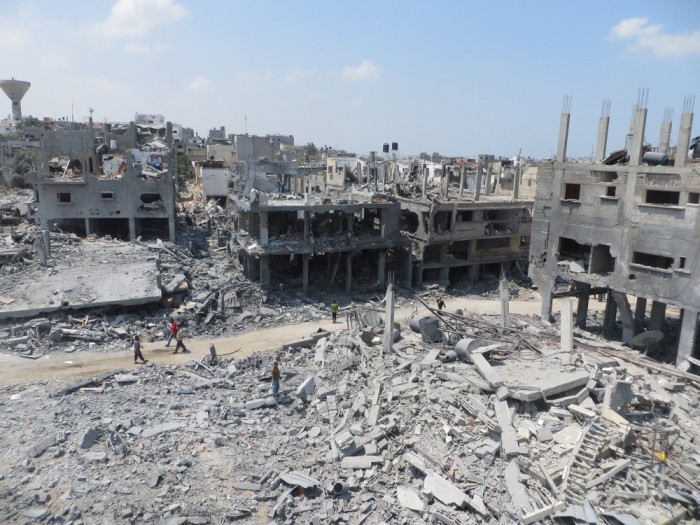 A few weeks before the Commission’s findings, the Israeli government published its own assessment of the conduct of operations in Gaza.

Israel’s report also focused in detail on its use of artillery shelling, and made three very important statements to help us understand how and when its forces can use these weapons.

Claim 1: Only a fraction of attacks

Firstly, Israel claimed that “IDF policy on the use of HE [High Explosive] artillery in populated areas is more stringent than mandated by the Law of Armed Conflict. During the 2014 Gaza Conflict, HE artillery was, in the overwhelming majority of cases, used in open areas devoid of civilian presence. In a small minority of instances IDF forces, on an exceptional basis, used HE artillery in areas where civilians were or may have been present.” IDF policy, Israel says, prohibits the use of artillery in populated areas in ‘certain situations’ even when it would be allowed under IHL.

This claim has been made repeatedly, including in previous correspondence with AOAV. Yet available evidence suggests that while this may be IDF policy, it did not appear to be its practice during fighting in 2014.

The Gaza Platform is an analytical tool published last week by Amnesty International and Forensic Architecture. The platform maps 2,696 incidents of violence in Gaza last year. It shows where the attacks took place, what weapon was used, and what casualties were reported.

The platform maps 334 separate artillery ‘events’ in Gaza. Not all of these caused casualties or damage, but each has its own location, whether it was military, commercial, a school or a hospital. AOAV analysis suggests that while 18% of artillery shelling incidents fell in open areas, and 2% hit military locations, by far the most frequent location for artillery incidents to be mapped was residential areas (37%). It was therefore roughly twice as common for artillery shelling to hit a house than it was to land in a field, as IDF policy suggests. Not every incident of shelling is mapped by the Gaza Platform yet, but even taking that into consideration, what is clear is that if the IDF is correct in saying that ‘only a fraction’ of artillery shelling took place in populated areas, it was a pretty big fraction.

Secondly, the IDF claims that its directives “set stringent restrictions on the use of HE artillery shells.”

AOAV’s investigations found that changes made by Israel to its rules of engagement since 2005 (when Israel withdrew from Gaza) mean that civilians were put more at risk from artillery shelling in 2014 than ever before. However, the IDF claimed that it had in fact taken significant measures that meant that in the ‘fraction’ of incidents that did take place in populated areas, the use was “restrained and calculated.”

One vital such measure is the ‘safety distance’, a rule which says how close artillery shells can land next to residential homes. In 2005 that distance stood at 300 metres. This was reduced by the IDF in April 2006 to 100m. The IDF claims that it set new distances following the 2008-09 conflict in Gaza, but provides no evidence to say what those distances were, and whether they were larger or smaller than the 300m standard from 2005. As the expected casualty-producing radius of a 155mm artillery shell is close to 300m, even this larger standard cannot be said to be providing effective protection to civilians, and any distance smaller than that would still keep civilians and their homes inside the wide impact area of an artillery shell.

Israel’s report does not go into detail on the matter of safety distances, but does describe several technical and procedural precautions it uses to try and minimise impact on civilians. As a matter of policy, the IDF uses forward observers to watch and report where artillery lands to help increase accuracy. On the technical side, Israel claims that it always fires a few inert shells into an empty open area before an attack to measure the trajectory and environmental factors, and only then conducts an attack.

These are two good practices in the use of artillery, and it is helpful to have them clarified and detailed in the public domain. But even then all that really adds up to is that that Israeli artillery policy does not allow for unobserved, uncorrected fire. This refers to the practice of firing bombs and shells at a targeted area without any feedback or recalculation.

Basic logic dictates that lobbing in bombs willy-nilly into a populated area without knowing or caring where they land is a practice most likely to cause utter devastation. Such attacks are also most likely to violate one of the central tenets of the laws of war; of indiscriminately attacking a location.

So it is good to see written confirmation that this isn’t the policy of the IDF. Most reasonable analysts would have doubted such a flagrantly irresponsible policy was in place anyway, and this statement only affirms that IDF policy is better than the absolute minimum standards available. Yet as the Commission of Inquiry notes, the body of evidence from Gaza strongly suggests that artillery attacks were broadly consistent with existing IDF rules of engagement, and these attacks did cause considerable civilian casualties and extensive damage to populated areas. These recent statements do not really shed much light on exactly how this came to happen.

Perhaps the most important statement to emerge from Israel’s own report is this: in spite of the military advantages of artillery, “using HE artillery in such [i.e. populated areas] presents particular challenges, both tactical and humanitarian, due to the limited accuracy of regular HE shells, on the one hand, and the presence of civilian property and of civilians that may have remained in the area, on the other.”

This statement gets to the heart of the matter. It is an explicit and valuable recognition of the inherent humanitarian concerns with the use of such a wide-area impact weapon in populated areas. It also shows an understanding of the strategic argument against this pattern of violence, that it creates more problems than it ‘solves’ for an attacking force.

The reason this statement matters most is that it is part of the growing recognition among states that there are fundamental and systemic issues in the use of heavy explosive weapons in populated areas. More needs to be done to provide meaningful protection for civilians from these weapons and practices. It doesn’t need a legal response or a total ban. It does need states to develop a political strategy that promotes stronger collective standards.

AOAV is a member of the International Network on Explosive Weapons (INEW). INEW is calling on states to join efforts to develop a political commitment to reduce harm to civilians from the use of explosive weapons in populated areas.

Read AOAV’s investigation into the IDF’s artillery polices: Under Fire