As the world further embroils itself into the conflict in Syria and, according to some sources, public opinion appears to be growing in favour of further intervention it is necessary to consider how informed we are about the true nature of such conflicts.

People tend to receive much of their knowledge about war from the media but how far should we trust these sources and why do they vary in their reporting?

There is considerable variation in the reporting of incidents involving civilian casualties between different media sources. These differences can be observed between media across the political spectrum (e.g. right wing and left wing newspapers), or across media from different countries, (e.g. the country at war, participating countries and non-participants).

It is important to understand why these differences exist and what the variables are that make particular conflict events interesting to certain media sources but not to others. I am currently undertaking research using the Iraq Body Count (IBC) conflict dataset that shows which of around 200 media sources reported around 20,000 unique conflict incidents which killed civilians in the Iraq war between 2006 and 2013.

In preliminary investigations I have attempted to quantify how the importance of particular conflict events change across different sources and why some conflict incidents are barely reported whilst others are covered by many outlets.

The biases present in the media’s reporting of conflict are important for several reasons. Most notably because it has been shown in previous research, for example by Eisensee and Stromberg, that governmental and aid agency responses to crises are partially driven by the perception of the event in the media.

The perceptions of a conflict by people living outside the conflict zone are likely to be influenced by the media coverage they consume. They will therefore be skewed in their beliefs about the nature of that conflict if the coverage is subject to reporting bias. Following this, then, it is possible that government or NGO responses may have been suboptimal in Iraq due to being a response to perceptions of the war rather than the reality.

Specific biases I have found include the distance the event happened away from Baghdad (the capital city where most media were based), the date the event took place and who the perpetrator was.

Here, however, I address in particular how weapon type impacted upon coverage and more specifically the differences in reporting intensity between incidents using explosive weapons and those involving other weapon types. In order to do this I have used probability models to build predictions of whether media sources report a particular incident based upon information about those incidents.

One thing which is clear is that compared to conflict events involving other weapon types those incidents involving explosive weapons are significantly more likely to be reported. This effect is greater still when looking at only those bombing incidents which involve suicide. This result appears to hold despite controlling for the number of fatalities, injuries, the location, the perpetrator and the date of the event.

This suggests that there is something altogether different about conflict events involving explosive weapons other than the variables controlled for which makes them more newsworthy.

Within the dataset we see countless examples of where this bias exists, for example on one day in September 2012 in Diyala province there was both a gunfire incident against a member of the local awakening council and a suicide bombing near a police station both of which killed one civilian. Whilst the shooting only received limited coverage by Xinhau in China the bombing received coverage across the world. It was picked up by the Associated Press and the National Iraqi News Agency as well as Xinhau and local Iraqi coverage.

This pattern of the underreporting of incidents not involving explosive weapons is replicated again and again throughout the conflict though there are of course significant outliers on both sides. Examples of these outliers include filmed executions which often attract huge media attention despite not involving explosive weapons. There may be also be explosive violence which receives less coverage than may be expected because it takes place in less ‘newsworthy’ locations such as those out of town away from mosques and schools. 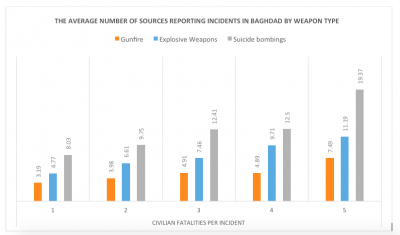 chart compares media coverage of gunfire, explosive weapons (of any type) and suicide bombing events in Bagdad by showing the mean number of media sources (of those covered in the dataset) that reported varying sizes of incident. It shows the gap between reporting intensity at all incident sizes when we aggregate the data and seems to suggest that the relative gap stays fairly constant regardless of how many people were killed.

Controlling for the number of fatalities, conflict incidents involving explosive weapons receive around 50% more coverage amongst the sources that IBC monitor than that received by gunfire incidents and when looking only at suicide bombings this goes up to around 150%.

There are several potential channels that could be behind the observed variation in reporting.

One is the collateral damage incurred in an event involving explosive violence which can be difficult to measure or observe but still increases the media interest. This can range from damage to buildings or property to the psychological damage that can be a consequence of this type of attack.

The difference in intensity of reporting is also likely to rely heavily on the demand driven by consumers of media. There is an argument that people find explosive violence more interesting and exotic than other types of violence and hence media providers are more inclined to report incidents of this type. The nature of a suicide bombing where someone, often a woman or child, is willing to blow up themselves and others for a cause is a particularly strong example of this, which could explain why suicide bombings appear to garner even more coverage than other incidents involving explosive weapons.

Finally, bombings are often targeted against those whose deaths accrue the most media coverage. Anecdotal evidence from the database shows many examples of bombing attacks targeted against the police or army that kill civilians as a by-product. Research by economists such as Berman and Laitin has found that those engaging in suicide attacks in particular are more likely to choose targets who would be difficult to kill through any other method. It is fair to assume that often the death of those targets would also be likely to garner most press coverage.

Whilst the channel through which the use of explosive weapons impacts upon the intensity of media coverage is difficult to determine it seems clear that the effect does exist. It is therefore important for us to build a greater understanding of any impact that this bias in coverage may have had.

On a micro level this impact could be in the form of the personal impact upon the friends and families of killed civilians whose deaths go virtually unreported simply because of the type of weapon that killed them. However, if governmental responses are indeed partially determined by the coverage of the media then this bias in reporting could have had a large impact upon the allocation of aid and resources in Iraq during the invasion. It could also have a significant impact on the ongoing war in Syria and Iraq in which decisions made off the back of potentially misinformed public opinion could have far reaching consequences for the lives of thousands of civilians.

Nathan Woolley is a Postgraduate research student in the Department of Economics at Royal Holloway, University of London.