As the world focuses on the atrocities Islamic State is carrying out in the Middle East, an equally worrying trend of videoed torture has established itself on the other side of the world, in the drug wars being fought across Mexico.

One video, put up by the Los Zetas gang in 2012 and disseminated on popular blogs and websites that track “narco killings”, begins with a woman decapitating a man while still alive. The man is then dismembered. At one point one of thesicarios, or assassins, carves the gang’s sign – the letter Z – into the stomach of the victim. The message of this, and many other videos, is loud and clear: don’t mess with Los Zetas.

Another, found this year on a confiscated mobile phone and later leaked onto the internet, shows the final minutes of a terrified man and child being blown up by dynamite strapped to their chests. It was a gang-style execution believed to be the work of the Mexican drug gang the New Generation Jalisco cartel.

The cartels have long used violence to assert their control over the drug routes from Colombia to the United States. Rival gang members and others have beenburnt alive with diesel instead of petrol because diesel burns slower. People’s heads have been cut off and thrown into the centre of discos. And a few years ago in southern Mexico investigators found 11 decapitated bodies stacked together, and 11 burn marks in a circle in a nearby field – the ashen remains of the victims’ heads.

The use of social media, though, to disseminate such violent messages is a relatively new and growing phenomenon. Gangs like Los Zetas now produce videos that end up on popular sites such as Blog del Narco, the drug dealer’s blog. On it you can view titles such as “3 men skinned alive & beheaded” or “Man is chain-sawed to pieces & left in a soup pot with vegetables”.

In a recognition that such extreme barbarism could be self-defeating, Isis chief Abu Bakr al-Baghdadi said in July that Isis would desist from filming the actual moment of execution (though it will continue to show the moments before and after). But there has been no such statement from the Mexican gangs, which use the films to protect their drug routes and intimidate those they extort money from.The gangs have even turned to Facebook and Twitter. One member of the Knights Templar cartel, who calls himself Broly Banderas, regularly puts up photos of himself posing with guns or writing messages about trucks, girls and beheadings. Such boasting is brazen. Many gang members do not disable their geo-locations and so they can be tracked – some even posting from prison.

The gangs also use social media to recruit, move product or mark their territories. They use it to find and intimidate any journalist who dares challenge them. They even use it for hearts and minds campaigns; after one storm the Cartel de Sinalos put up videos showing them handing out food and tents to victims. The message was that they were the only force worth trusting in their territory.

The Mexican government is acutely aware of the power of such media. In April 2013, a presidential adviser, Óscar Naranjo Trujillo, addressed a national conference for security press officers. He recommended eliminating certain words from their lexicon, including decapitado(decapitated person), descuartizado (a dismembered body) andencobijado (body wrapped in a blanket and dumped).

Such mild attempts seem, given the deluge of torture videos, futile. But it is a recognition by the state that the cartel’s filmed terrorism might fuel its use of torture. 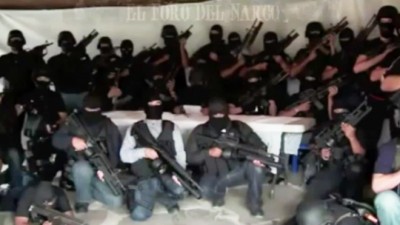 One of many of Mexico’s Cartels: Cartel de Jalisco Nueva Generacion Free

Of course, it is difficult to prove that the filming of violent deaths has helped fuel Mexico’s violence. But what is striking is that there are far fewer international legal restrictions on someone watching clips of gang members skinning a man alive compared to, say, viewing the sexual abuse of minors. Websites like LiveLeak.com just post a warning sign to viewers before they click through to images showing intimate death.

This begs the question: why is not more being done to attack this pornography of violence?

While Facebook has a system called PhotoDNA that scans photographs then matches it with a police database in order to combat child pornography, when it comes to torture and violent murder the company relies on users complainingabout such images. Google, similarly, has a zero tolerance approach to child sex abuse imagery, and shows warning messages for more than 13,000 search terms related to it. The same does not apply, though, to search terms such as dismembering or beheading.

But could blocking the dissemination of viscerally violent films reduce the impact that such films have? And in so doing might it reduce the use of such filmed torture? Imposing a “child pornography” approach to censoring terror videos could possibly limit the cartels’ impact, even leading them to shift away from such graphic, public statements.

Of course civil liberty advocates will argue against the use of censorship. But, then again, there are few voices speaking out against the banning of viewing child pornography, so why not against watching the recorded murderous torture of adults?

This article was first published in the Guardian.