This report was written by Middle East Monitor and first appeared here:

A new report claims that changes in the Israeli military’s rules of engagement have increased, not decreased, the risk to civilians in Gaza.

Action on Armed Violence (AOAV), a London-based NGO, examined how the Israeli army has used artillery in the Gaza Strip, including in last year’s ‘Operation Protective Edge’ assault.

AOAV found that “rather than reducing the risk of civilians dying from Israeli explosive weapons”, the army’s “previously quite strict rules regulating artillery practice have been relaxed since 2005.”

While Israeli officials claim significant improvements have been made in protecting civilians from artillery shells, research conducted by the NGO indicted that “when it comes to the use of Israeli artillery on Palestinians there is a wide gap between public rhetoric and the reality on the ground.”

The report, ‘Under Fire’, states that the Israeli army launched at least 34,000 unguided shells into the Gaza Strip in 2014 – “the heaviest use of Israeli high-explosive artillery shells in eight years.”

During ‘Operation Protective Edge’, a daily average of 680 artillery shells were fired into Gaza, almost a doubling of the 348 per day during ‘Operation Cast Lead’ in 2008-’09.

In 2006 the Israeli army reduced the ‘safety distance’ dictating how close shells could land next to residential homes from 300 metres to 100 metres. However, the “expected casualty-producing radius of a 155mm artillery shell is close to 300 metres.”

AOAV says its “conclusions are stark.”

We argue in this report how the changes to military practice made by the IDF over the last decade to regulate their use of heavy explosive weapons have not led to significant and effective civilian protection on the ground.

According to the NGO’s Director of Policy Iain Overton, “the IDF is more reliant on [unguided artillery shells] now than they were almost a decade ago. There’s no reason why Israel can’t stop using such damaging weaponry in populated areas.” 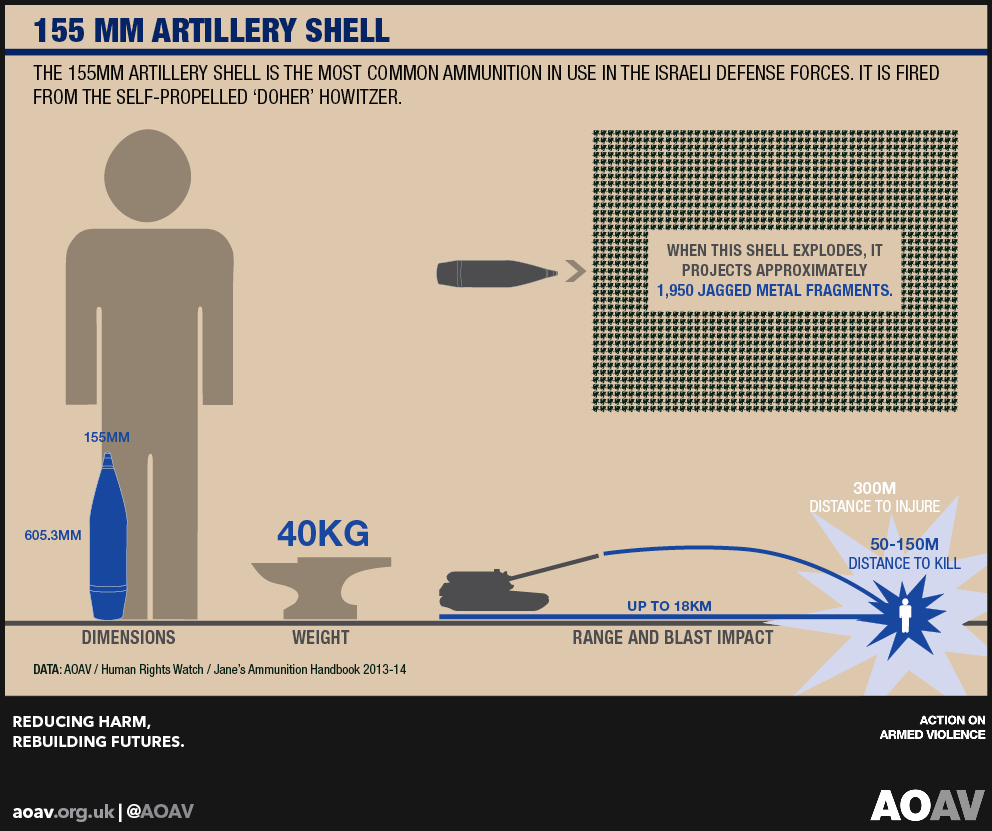