One hundred years ago today a demonic new weapon was launched upon the fields of Europe and in that moment warfare changed forever.

It was a weapon that, when used in the second battle of Ypres, destroyed any romantic notions of conflict. A means of killing more born in the sulfurous imaginings of hell than anything imagined upon the playing fields of Eton.

No orderly line of infantrymen, no cavalry charge, no heroism was able to withstand this killer. It was capable of decimating the enemy lines from a distance, and of instilling fear in the hearts of all men. Ultimately, it was the first effective use of a weapon that was to help pave the way for the world’s greatest inhumanity to man – the Holocaust.

Poison gas had been tried before. In early January 1915, the Germans claimed they had killed ‘140 English officers’ with chlorine, a powerful irritant that at high concentrations could cause death by asphyxiation. And on 31 January 1915, the Germans let loose almost 20,000 bombs containing liquid xylyl bromide tear gas upon entrenched Russian soldiers during the Battle of Bolimov, Poland. The chemical froze and the attack failed.

But when 168 tonnes of chlorine were released from almost 6,000 cylinders in the Belgian municipality of Langemark–Poelkapelle, just north of Ypres, just three days into the second battle for the ruined Medieval city, the effect was devastating.

The grey-green chlorine cloud drifted across the ruinous landscape of Flanders on a light easterly breeze on 22 April 1915. It was just after 5.30 in the evening, and the troops on the other side were preparing their dinner. They were likely making couscous, because these trenches were filled with French Colonial troops. It had been a quiet day, but when the gas hit chaos reigned. Men died rasping for breath with foam-flecked mouths. A seven-kilometre gap in the Allied defences opened up. And it was only the combination of the Germans’ lack of reinforcements, their soldier’s own fear of advancing into the pockets of gas they had created, and a swift response from the 1st Canadian Division, that prevented a decisive breakthrough that could have ended the war there and then. 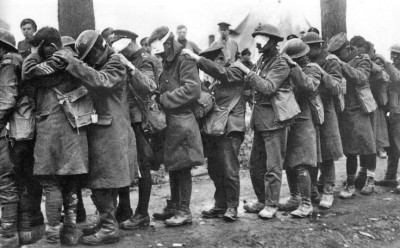 It is easy to understand why there was so much confusion that day. To soldiers brought up in rural areas, young men unaccustomed to the chemical advances of that new century, this ugly, industrial form of warfare must have been terrifying. Such men had been raised on a vision of warfare in which bayonets and honour held sway, where conflict was meant to be fair and clean. But gas was none of those things. It could creep up on you, and take your life in its gangrenous-green embrace before you realised you were even under attack.

The Allied response to the Ypres gas attack was threefold. First, there was outrage – this was the diabolic work of an uncivilised nation, they said. The Entente governments denounced the attack as an ugly violation of international law.

Then there was the response – how could they protect their troops? When the chlorine cloud had hit, one fast-thinking Canadian doctor ordered his men to use a novel form of homemade protection – to soak cotton pads in their own urine and cover their noses and mouths. But pretty soon more effective gasmasks were being mass-produced – a million reportedly being made in one day alone.

Finally the Allies responded in kind. By September 1915, the British were using chlorine at the Battle of Loos. Phosgene and Mustard gas soon followed. The era of using whatever means possible to defeat the enemy had come.

War is the locomotive of innovation, and gas was innovation’s ugly progeny. It was the by-product of a deadlock created by machine guns and artillery. And it changed everything.

The use of gas ended any illusions that war was fair. It wiped out the ‘Football in No Man’s Land’ Christmas spirit and replaced it with the notion that the Great War was one being fought for the very soul of civilisation. The trenches of Flanders became the staging ground for a Manichean struggle between good and evil. Total War had come to pass.

By the end of Spring 1915, the British public’s view of Germany had hardened. The May publication of the British Government’s Bryce report, cataloguing the rape of nuns and the murder of babies by the Hun in Belgium, was bad enough. Then the sinking of the Lusitania in that same month, with 1,198 souls lost at sea, confirmed in the British public’s mind that the German was a savage, demonic beast.

The use of poison gas caused one right-wing journalist, Horatio Bottomley, to demand a campaign of persecution against German expatriates in Britain. Bottomley wrote that “you cannot naturalise an unnatural beast, a human abortion, a hellish freak. But you can exterminate it.” A dark framing for what was to come.

Gas appealed to Teutonic ambitions and mentalities. It meant soldiers no longer had to look their victims in the eye when massacring them; it was practical and cheap; and it appealed to a certain philosophy wherein the end justifies the means.

In Germany, by the 1930s, the architects of the Third Reich were using poison gas to enact a ‘public euthanasia’ programme that was aimed at exterminating the physically and the intellectually disabled. By 1941 the infamous Zylon B was being used against Soviet POWs. And ultimately, of course, poison gas would be used to help pursue the Aryan ambition to eliminate Judaism from the face of Europe. In this way what began in the field of Flanders found its logical conclusion in the chilling ‘shower rooms’ of Auschwitz.

The clouds of gas that billowed across no-man’s land on 22 April had horrific consequences in their own right. But, in terms of the seed they planted in the minds of the Austrians and Germans who condoned the use of gas, they had consequences beyond horror.

Iain Overton is Director of Policy at the London based charity Action on Armed Violence. His first book, Gun Baby Gun: a bloody descent into the world of the gun, was published this month.

This article was first published in the International Business Times.