Home / AOAV: all our reports / Libya

Two suicide attacks yesterday show the continuing horrors being carried out by ISIS in the Middle East.

In Iraq, where ISIS have taken control of swathes of territory since 2014, three militants drove Humvees into a police base, killing at least 30 troops and injuring another 40. The Humvees, which caused a large ammunition depot inside the base to explode, were reportedly three of the 2,300 Humvees which were seized by ISIS in June 2014. Iraq has been plagued by improvised explosive device (IED) attacks in recent years. In 2013, AOAV recorded over 12,000 civilian deaths and injuries from IED attacks, more than three times as many as the next most affected country, Pakistan. In 2014, as well as IED attacks, the country saw violence due to ISIS and resulting coalition air strikes. 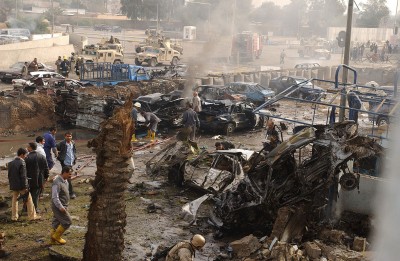 The aftermath of a car bomb in Baghdad, Iraq.

Also yesterday, ISIS claimed responsibility for a suicide bombing outside the Libyan city of Misrata. Five people were killed and eight injured when a suicide bomber drove a car filled with explosives into a security checkpoint. While ISIS has been very active in Iraq and Syria, the group has only recently begun carrying out attacks in Libya. AOAV first recorded such an attack in January 2015, and then in the first three months of 2015, 122 civilians were killed and injured by IED attacks claimed by ISIS.

ISIS appears to be increasingly using suicide attacks to further its action in the Middle East. One of the most disturbing aspects of this is their reported willingness to use children to perpetrate suicide attacks. It has been reported that up to 500 children, kidnapped by ISIS in Iraq, are being trained as child soldiers and suicide bombers.

The group dubs these children, who were taken to training camps in Iraq and Syria, the ‘cubs of the Caliphate.’ Diyala’s chief of police, Lieutenant General Kasim al-Saidi, claims that “they are going to brainwash these kids into being suicide bombers.”

This is not the first time that reports of children being trained as suicide bombers have surfaced. In February 2015, an ISIS video was released showing a training camp for children; “the next generation of ISIS.” Renate Winters, member of the UN Committee on the Rights of the Child, says that many of the children being used as suicide bombers “are mentally challenged” and will have little to no idea what is happening to them. The UN Human Rights Council found in 2014 that ISIS was recruiting “children into armed roles under the guise of education” and that they were being “deployed in active combat missions during military operations, including suicide-bombing missions.”

The use of children as suicide bombers, something which has also been reported in Nigeria, must be completely condemned. They are being coerced, manipulated or forced into carrying out attacks that will likely lead to their own deaths and the deaths of others.

The use of IEDs as a tactic in general results in some of the most destructive and deadly attacks recoded by AOAV. Attacks which deliberately target civilians, or are indiscriminate in their nature, are illegal under international humanitarian law. AOAV calls on states to do all in their power to undermine and restrict the availability of IED materials to prevent such future attacks, and urges all users of explosive weapons, including IEDs, to stop the use of such weapons in populated areas.