AOAV’s report A Tale of Two Cities explores the use of explosive weapons by UK and US forces in Basra and Fallujah respectively, 2003-04. It has been divided into chapters in this series. To read the full report see here.

In the midst of international controversy and condemnation, on 20 March 2003 a coalition of allied armed forces launched a military intervention against the regime of Iraqi President Saddam Hussein. Forty-nine countries supported ‘Operation Iraqi Freedom’ (see Figure 1), led by US and UK forces. The intervention triggered years of conflict. Widespread armed violence still scars the people and the landscape of modern-day Iraq. By the end of 2014, Iraq Body Count (IBC), which maintains the world’s largest public database of violent civilian deaths in the country, estimates that as many as 150,000 civilians have died violent deaths in Iraq since those dark March days of over a decade before.

Today, Iraq stands out as the country most blighted by explosive violence. Action on Armed Violence (AOAV) has been tracking the impacts of explosive weapons around the world since 2011. These weapons, which include the likes of aircraft bombs, mortars, rockets and improvised explosive devices (IEDs), are responsible for thousands of civilian deaths and injuries every year. Between 2011 and 2013, AOAV documented more civilian casualties from explosive weapons in Iraq than in any other country. AOAV has recorded 28,918 total casualties from explosive weapons in Iraq, of whom 25,224 (87%) were civilians.

Perhaps this is not surprising, given the historical legacy of harm that conflict has brought upon this nation. From day one, as the infamous ‘shock and awe’ campaign reduced the Iraqi capital city Baghdad to rubble and ruin, using explosive weapons even in densely-populated areas was central to the strategies of coalition forces. In part this was to avoid military casualties amid intense public scrutiny. “The American way of war substitutes manpower for firepower,” said retired Army general Bob Scales during the early days of the unfolding conflict. “We expose as few troops as possible to close contact with the enemy. We do that by killing as many enemy as we can with precision weapons.”

How precise these weapons actually are is a subject of much debate: but explosive weapons are a tool that is all-too often used to fulfil such rhetorical and strategic ends. The reason for this is clear: they can be deployed at a significant distance from the source of threat; and dropping bombs from fighter jets or launching shells from long-range artillery affords a degree of security to the perpetrators.

Their distancing effect however, is one central reason why the use of explosive weapons in populated areas raises enormous concerns for the protection of the civilians who are caught in the maelstrom of violence. These are weapons defined by their inherent capacity to affect a wide area with blast and fragmentation effects. Any use of explosive weapons in populated areas puts civilians at grave risk of unintended death and injury, as well as causing often-catastrophic damage to civilian buildings and infrastructure.

The protection of Iraqi civilians was repeatedly cited as a motive both for the 2003 intervention itself, and as a key priority throughout the later years of fighting. The implicit objective of enhancing the protection of civilians in Iraq imposed a heightened burden to ensure that this goal was not endangered by the means used to achieve it.

Unlike the wars in Afghanistan or the Balkans, the Iraq war was waged not by a formalised alliance (i.e. NATO), but by a coalition of national militaries. All forces involved in the initial months of fighting were under the ultimate direction and leadership of US Central Command (CENTCOM). However, different conflict parties observed differing rules of engagement. While sharing the implicit objective of seeking to enhance civilian protection in Iraq they faced differing contexts and challenges, and were guided by differing approaches and policies. 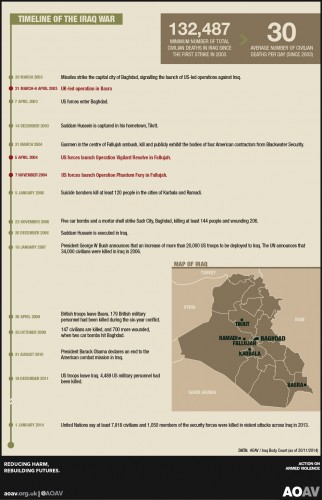 In this report, AOAV looks at the military practices and rules of engagement in place in two cities: Basra and Fallujah. The two periods analysed here are the ‘Battle of Basra,’ when UK forces led an operation in the southern city of Basra between 21 March to 6 April 2003 (with military support of US and Australian forces), and the two operations undertaken by US forces in Fallujah in 2004: Operation Vigilant Resolve (5-28 April 2004), and Operation Al-Fajr/Phantom Fury (7 November 2004 to 23 December 2004).

Comparing operations in Basra and Fallujah allows for a consideration of how national military practices can affect the ways in which explosive weapons are used in populated areas. It also demonstrates how these approaches impacted the civilian communities in these two cities.

While direct comparisons between these two cities are inevitably limited by context, broad contrasts can be drawn and valuable questions raised by examining the rules of engagement that govern the use of explosive weapons in populated areas during the Iraq War.

What were the approaches and attitudes at the time of these two militaries, among the best funded, most technologically advanced in the world? How were the decisions to deploy explosive weapons in populated areas shaped by their respective military practices?

It is not the objective of this research to apportion blame on individuals, or to comment on the legality of either specific actions or the operation as a whole. Rather AOAV seeks to compare military practices and procedures during a major recent conflict, and to identify military practice that reduced the risk of civilian casualties.

Research for this study was carried out through publicly-available open-source material, including an analysis of the Iraq War Logs, previously secret US military files released by WikiLeaks, as well as transcripts of interviews of high-ranking British military personnel from the Chilcot Inquiry, an inquiry into the UK’s involvement in the Iraq War.

There are limitations implicit in relying solely on open-source material. Documents relating to the military, such as the British rules of engagement, are often inaccessible to the public, and there were reports, particularly during the assaults on Fallujah, of media access being severely limited.

The focus of this report is on explosive weapons and their implications for civilians. Many other weapons were used by all parties to the fighting in Iraq, ranging from firearms and blunt instruments, to depleted uranium and white phosphorous. While these raise many other important civilian protection questions, they fall outside AOAV’s focus and are not addressed in this report.

In addition to the fundamental prohibition on any direct attacks against civilians or civilian objects, the central tenets of IHL include rules on precaution (measures must be taken ahead of any attack to avoid and minimise harm to civilians), distinction (efforts necessary to distinguish at all times between combatants and civilians, as well as military and civilian objects), and proportionality (that not attack can be excessive in the harm caused to civilians in relation to the concrete and direct military advantage anticipated).

Crucially IHL provides only limited protection against the pattern of harm caused by the use of explosive weapons in populated areas. It does, however, represent the building blocks upon which rules of engagements (RoE) for all militaries are theoretically based.

RoE are military directives that describe the circumstances under which ground, naval and air forces can enter combat. They stem from multiple field manuals, doctrines and training publications, not all of which are in the public domain. Even a decade after the Iraq war began most of the rules in place at the time for both US and UK forces are still in force today, and, in the UK in particular, a lot of information specific to the questions asked by this research is restricted from public scrutiny.

These rules are not restricted solely to the deployment of explosive weapons, but provide insight into principles governing all lethal use of force. Both the UK and US publically emphasised how the RoE for Iraq were informed and underpinned by the principles of IHL.

The 2000 Standing Rules of Engagement for US Forces (CJCSI 3121.01A) state, for example, that the use of force is limited by international law, as well as setting out additional limitations such as US domestic law and policy.  IHL represents only the minimum requirements for states, and the rules of many militaries are thought to be far more restrictive than these general parameters.

RoE are concerned with the balance between protecting both forces and civilians whilst still achieving a military objective. UK soldiers serving in Iraq, for instance, were issued with ‘Card Alpha,’ which stated the narrow parameters in which lethal force, including with explosive weapons, would be permitted. Card Alpha stated that “[…] in all situations you are to use no more force than absolutely necessary.” Troops should “only open fire against a person if he/she is committing or about to commit an act likely to endanger life and there is no other way to prevent the danger.”

Despite the limitations on publicly-available information it is clear that both US and UK forces explicitly prioritised the protection of civilians from incidental harm; so-called ‘collateral damage’.

“Under British military rules of war, British troops would never be given clearance to carry out attacks similar to those being conducted by the US […] British rules of engagement only allow troops to open fire when attacked, using the minimum force necessary and only at identified targets. The American approach was markedly different. When US troops are attacked with mortars in Baghdad, they use mortar-locating radar to find the firing point and then attack the general area with artillery, even though the area they are attacking may be in the middle of a densely populated residential area.”

Efforts to limit civilian casualties in the course of fighting inevitably necessitate restrictions on the occasions in which force can be used, as well as on the means and methods of such force.  In Fallujah, US Lt. Gen. Richard Natonski said: “There were many times that my regiments had targets that they wanted to engage, but because of the rules of engagement and the amount of collateral damage, we were precluded from hitting certain sites in the city.”

However, the operations carried out in Fallujah by American troops in 2004 resulted in significant civilian casualties and civilian infrastructure damage when compared to the British-led operation conducted in Basra in 2003. Despite a clear awareness of the need to avoid collateral damage and to minimise harm to civilians, over a thousand civilians died in the two assaults on Fallujah.

“There was never a cavalier attitude toward civilian harm, early in both the wars in Afghanistan and Iraq,” as Neta C. Crawford, Professor of Political Science at Boston University, highlights. “[Y]et the US military and political leadership seemed to tolerate greater collateral damage when military necessity was believed to demand it.”

A more flexible, fluid definition of what constitutes military ‘necessity’, or what is meant by ‘excessive’ collateral damage allows for considerable interpretative variance among commanders on the ground. The more permissive the RoE are, the more they heighten the margin for error in the heat of battle, and the more likely it is that civilians fall victim to explosive weapon use.