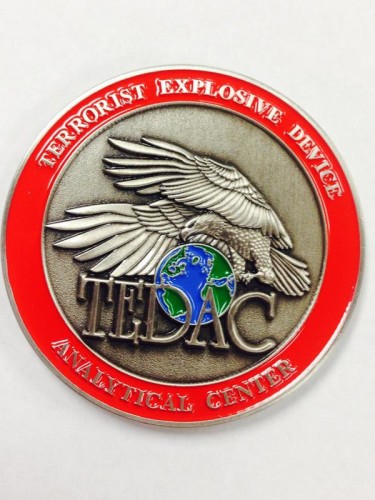 The Terrorist Explosive Device Analytical Center (TEDAC) was established in 2003 and is stated to be “the single interagency organisation to receive, fully analyse, and exploit all terrorist IEDs of interest to the United States.” It coordinates all US government efforts, from law enforcement to intelligence to military, to gather and share information on IEDs. In addition to information sharing, it aims to help to disarm and disrupt IEDs, link bombs to those who construct them, and help to prevent future attacks. TEDAC has received tens of thousands of IED submissions, primarily from Afghanistan and Iraq.

TEDAC works with partners who are responsible for disrupting networks and individuals responsible for the design, development, purchase, assembly, and deployment of IEDs. It provides:

The Center recognises the importance of a whole-of-government approach, and sharing information between police, military, and intelligence, something that is traditionally difficult to achieve.

Before TEDAC was established, no single government agency was responsible for analysing evidence related to IEDs, and the existence of the Center has had a big impact on countering the harm caused by IEDs. TEDAC has 13 government agency partners and 17 external partners. In the ten years between 2003 and 2013, the Center examined more than 100,000 IEDs from around the world, processing more than two million items for latent prints. This has resulted in 1,000 individuals being identified as having potential ties to terrorism, and more than 100 people being added to the US government’s Terrorist Watchlist.

TEDAC personnel work with bodies including the FBI Evidence Response Teams and local law enforcement to transport critical evidence to its lab. This evidence can be used for criminal prosecutions, and “since we also partner with the military and the intelligence community, our work is utilised by many different sources.” In February 2015, an Afghan was sentenced to 25 years in an Afghan prison due to TEDAC linking him to 39 different IEDs. And in 2005, an IED dug up in Iraq and analysed by TEDAC was linked to an Iraqi refugee living in the US, who subsequently received a 40 year prison sentence.

The military uses the intelligence gathered and analysed by TEDAC to protect armed forces and to try to disrupt global networks making explosives. The intelligence is also used by decision makers to help in the formation of national government policy.

One of the key positives of TEDAC is its emphasis on fostering cooperation between government agencies. Such agencies, which often fought over the ownership of countering IEDs and kept information from one another, now work together, sharing information and intelligence which can be used nationally and abroad to try to prevent IED attacks. The work of TEDAC in analysing bombs for fingerprints, fibres, and hairs, has been particularly important in trying to prevent IEDs from being constructed and planted. JIEDDO, now JIDA, has spoken of the importance of such information: “Biometric data is especially useful in disrupting a network, in getting a good view of who they are and where they are. That information is passed along to the right user. The user may be going to drop a bomb on them, or it could be a law enforcement entity. We look for who has the capability to disrupt it.”

This “library of modern IED warfare” has played a central role in countering IEDs in America, and demonstrates the importance of a range of bodies working together to defeat these weapons.