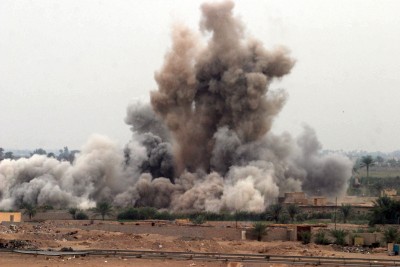 Coalition airstrike during 2004 US Iraq campaign

On the 20th of November, months after the conclusion of an investigation which ran from late April to early June this year, the US admitted for the first time to civilian casualties in an airstrike in Iraq. The acknowledgement follows an August 2015 report by Airwars suggesting that there were credible reports of at least 459 civilian deaths from US airstrikes in Iraq and Syria. The US armed forces had previously acknowledged in May the deaths of two children in a November 2015 airstrike in Harem, Syria. But the al-Hatira strike is the first incident of its kind in Iraq to be acknowledged by the Pentagon. The increased scrutiny may well be due to the outrage provoked by the October 2015 Kunduz airstrike which killed 22 people and injured dozens more at a hospital run by the international NGO Doctors Without Borders. The incident raises, yet again, the spectre of the real civilian cost of airstrike campaigns against ostensibly military targets.

Whilst the US may have only acknowledged two incidents of civilian casualties as a result of its airstrikes in Iraq and Syria, this puts it well ahead of any other country. In spite of an intense campaign of airstrikes that the Syrian Observatory for Human Rights and the Syrian Network for Human Rights both estimate have killed more than 400 civilians, Russian president Vladimir Putin continues to deny that Russian airstrikes have killed any civilians. Outside Syria, the Saudi-led coalition bombing Yemen – although it has not denied the deaths of civilians in general – continues its practice of denying responsibility for every high-profile attack (see here, here and here for example). For comparison, AOAV’s 2015 data up to August (before the beginning of the Russian intervention in Syria) records 976 civilian deaths from airstrikes in Yemen, 174 in Iraq and 1303 in Syria (most of which are from strikes launched by the Syrian Arab Air Force). Provisional data from September-November, since Russia began launching airstrikes, shows more than 400 additional civilian deaths from Russian air attacks of various kinds.

Concentrating on deaths also means that a huge part of the story is ignored. It goes without saying that an explosive weapon doesn’t have to kill to have a negative effect – it can also cause serious injuries, psychological damage or cause enough property damage to reduce people to poverty. Figures on property damage are more difficult to come by, but as of August, AOAV had recorded 201 civilian injuries in Iraq, 1339 in Syria and 1896 in Yemen as a result of air strikes and similar attacks.

In a conflict zone it can be very difficult to accurately evaluate the risk to civilians posed by the use of an explosive weapon, especially in places like Syria where good intelligence is often not readily available. But much more can and should be done to prevent civilian harm.

Allegations that the Russian campaign in Syria and the Saudi-led intervention in Yemen have been using ‘dumb bombs’ and cluster munitions – non-precision-guided munitions which may violate the legal principle of discrimination between civilian and military targets – should be cause for serious concern. Cluster weapons have been banned under the 2008 Convention on Cluster Munitions. Precision weapons, meanwhile, have been credited with reducing civilian harm.

But even precision weapons, when deployed in areas with high concentrations of civilians, are likely to cause serious damage. As of August, AOAV’s 2015 data records 3165 civilian deaths and injuries as the result of 143 air-launched attacks in populated areas. That’s approximately 23 civilians injured per incident – and as casualty numbers (as opposed to deaths) are often not reported, this probably does not reflect the full extent of civilian harm. And when compared to the numbers of armed actors who die in these attacks – for the same period, AOAV records only 372 armed actors killed by airstrikes in populated areas – these figures raise quite seriously the question of the military importance and value of these missions.

AOAV calls on all states to take the greatest precautions possible to avoid civilian death and injury when launching air attacks and for the proper investigation of allegations of civilian killings. Likewise, states – and non-state groups – should put an end to the use of indiscriminate air attacks. Finally, governments should work towards the establishment of a commitment to curb the use of explosive weapons in areas with a high concentration of civilians. These attacks cause by far the highest numbers of civilian deaths and injuries, as well as huge economic and psychological damage.