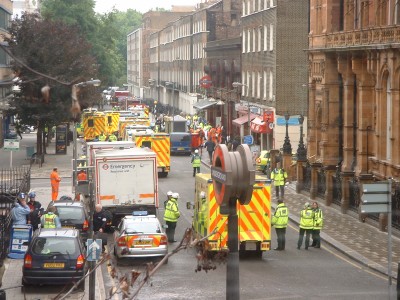 Ambulances at Russell Square after the 7/7 attacks.

Ten years ago today, four suicide bombers detonated explosives on public transport in London, killing 52 people. Three bombs exploded on underground trains in central London, and another was detonated on a bus. Almost 1,000 people were physically injured, with hundreds or thousands others who witnessed the rush-hour attacks suffering from psychological harm.

The 7/7 bombings were the worst terrorist attacks to have occurred on British soil, and the first time that IEDs had been detonated in the country by Islamic extremists. The attacks changed the city of London and the UK, and a host of counter-terrorism measures were adopted whose impacts are still felt today. As Tony Blair said at the time, the bombings changed “the rules of the game.”

Survivors of the 7/7 bombings have begun speaking out about the impacts of the blasts, both on their physical and mental health. People are still living with life-changing injuries, such as single or double amputations, blindness, and the loss of internal organs. An estimated 4,000 people were caught up in the blasts, and while the majority were not injured physically, many suffered psychologically, including from PTSD. Some of those who witnessed the explosions and their aftermath continue to suffer from vivid flashbacks, nightmares, panic, and hyper-vigilance.

IED attacks have devastating impacts on survivors, witnesses, their families and communities, both in the immediate aftermath of attacks, and in the longer term. The symptoms demonstrated by those caught up in the London bombings were evident in similar IED attacks like the 2013 Boston Marathon bombings. 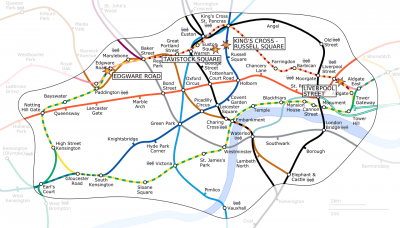 A tube map shows the location of the bombs.

It is crucial that survivors of such attacks be provided with adequate support, both physical and mental and full realization of their rights. There were shortcomings in such support in the aftermath of the London attacks, but lessons learned have been adopted by other cities and countries to ensure that these gaps do not happen again. AOAV found that one of the reasons that the responses to the Boston bombing were broadly commended was due to the fact that emergency responders had learned from London’s experience. Prior to the Boston Marathon bombings, the city of Boston had held a citywide training, involving those who had responded to the London bombings, as well as the Madrid and other mass casualty incidents. The Director of Emergency Preparedness at Massachusetts General Hospital told AOAV that this allowed them to adapt their disaster management plans on the basis of past practice and lessons learned. These changes helped to save lives in the aftermath of the 2013 bombings. Policy makers and emergency planners should ensure that any disaster management plans learn from previous experiences.

IED attacks cause devastation no matter where they occur. A decade later, the London attacks remain one of the worst IED attacks in recent years, and they show the horrific impacts of such weapons, which continue to be used today to cause death, injury and destruction around the world. In the four years from 2011 to 2014 AOAV has recorded 24,509 civilian casualties from 951 suicide bomb attacks in 29 countries.

In 2015, some of the deadliest explosive weapon incidents globally have involved suicide attacks. For example, on 20 March this year, 142 people were killed and at least 351 wounded in four suicide attacks at mosques in Yemen. A suicide bombing in Kuwait just last month killed 27 people, injuring a further 200. Suicide IED attacks are a global problem, and one which has continued unabated since the London bombings. From Nigeria, to Syria, to Iraq, these weapons kill and injure thousands of civilians every year. As in the London attacks, the vast majority of the bombings occur as people are going about their everyday lives: travelling to work, or shopping at a market, or praying.

AOAV conducts research into the impacts of suicide attacks on civilians, and advocates for measures to be taken by governments to try to limit the spread and severity of such attacks. Attacks which deliberately target civilians like the 7/7 bombings, or are indiscriminate in their nature, are illegal under international law. Many suicide attacks, even if aimed at specific military targets, will likely catch civilians in their wide-area effects if they take place in populated areas. AOAV believes that much more needs to be done to tackle the threat from IEDs. AOAV calls on states to increase collective efforts to undermine and restrict the availability of IED materials to prevent such future attacks, and urges all users of explosive weapons to stop the use of such weapons in populated areas.

The anniversary of the London bombings, as well as a time to remember the victims, should be seen as an opportunity to remind governments of the importance of trying to end the use of weapons like those used in the attacks. Crucially, the needs of those impacted by IED attacks must be met. Whether physically or psychologically injured, survivors, witnesses, and communities must be provided with adequate support in the aftermath of such attacks. Today is a day to think of the victims and survivors of 7/7, and to reaffirm our efforts to ensure that we do all in our power to meet their rights and needs.

Please contact Jane Hunter, jhunter@aoav.org.uk, with any comments or questions.