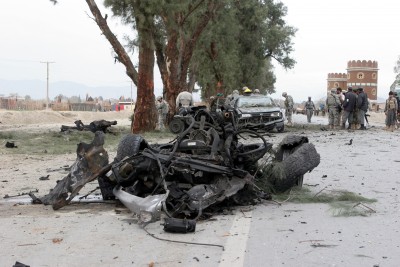 The aftermath of an IED attack in Afghanistan. Copyright of Joanna Wright.

This is part of AOAV’s report Tracking IED Harm. To read the full report, please click here. As part of this report AOAV examines organisation profiles and data, to read this please see here. The case study into the IED harm caused in Afghanistan can be found here. From this research AOAV generated recommendations and conclusions based on the data found – which can be read here.

Second only to firearms, improvised explosive devices (IEDs) take more lives every year than any other weapon. In 2013, UK-based charity Action on Armed Violence (AOAV) recorded 22,735 civilian casualties of IED incidents, 62% of which took place in populated areas like markets and cafes. Where IED attacks occurred in populated areas, 91% of the casualties were civilians. Between 2011 and 2013, AOAV recorded IED incidents in 66 countries and territories, resulting in over 60,000 deaths and injuries.

Despite these terrible figures, comparatively little is spoken about this harm in the international community. It is, however, AOAV’s belief that, by understanding the extent of the harm caused by IEDs we can take greater steps to understanding how to address it.

To this end, a new report by AOAV shows the current efforts to collect data on the use of IEDs globally, and how crucial the existence of such data is in preventing and responding to IED incidents.

The report contains an in-depth case study, considering the collection of data by the United Nations Assistance Mission in Afghanistan (UNAMA). This case study demonstrates the crucial nature of the collection of data, and how it can be used to engage with both state and non-state actors in an attempt to limit the effects of IEDs.

Since 2007, UNAMA has published a comprehensive, impartial analysis of civilian casualties in Afghanistan. Such data collation has had impact. UNAMA now challenges the use of IEDs, holds users to account, and provides advice to inform counter-IED strategies.

Iain Overton, Director of AOAV’s Policy and Investigations Department, said: “The global impact of IED harm is terrible. AOAV believes that through understanding the scale and the scope of the problem we can begin to tackle it. Data lies at the heart of that understanding, and we hope this report goes some ways towards identifying who is doing what and how in such IED data collation.”

Steven Smith, CEO of AOAV, echoed this message saying: “IEDs continue to cause death and destruction globally. Their increasing use has been shown to kill and injure civilians, destroy infrastructure and buildings, and cause displacement on a huge scale. It is, however, impossible to fully quantify the harm caused by these weapons and to effectively address and tackle this known humanitarian problem without reliable, comprehensive data.”

Interested organisations, particularly those with a focus on improvised explosive devices and data on their use should contact Iain Overton, ioverton@aoav.org.uk, with any comments. 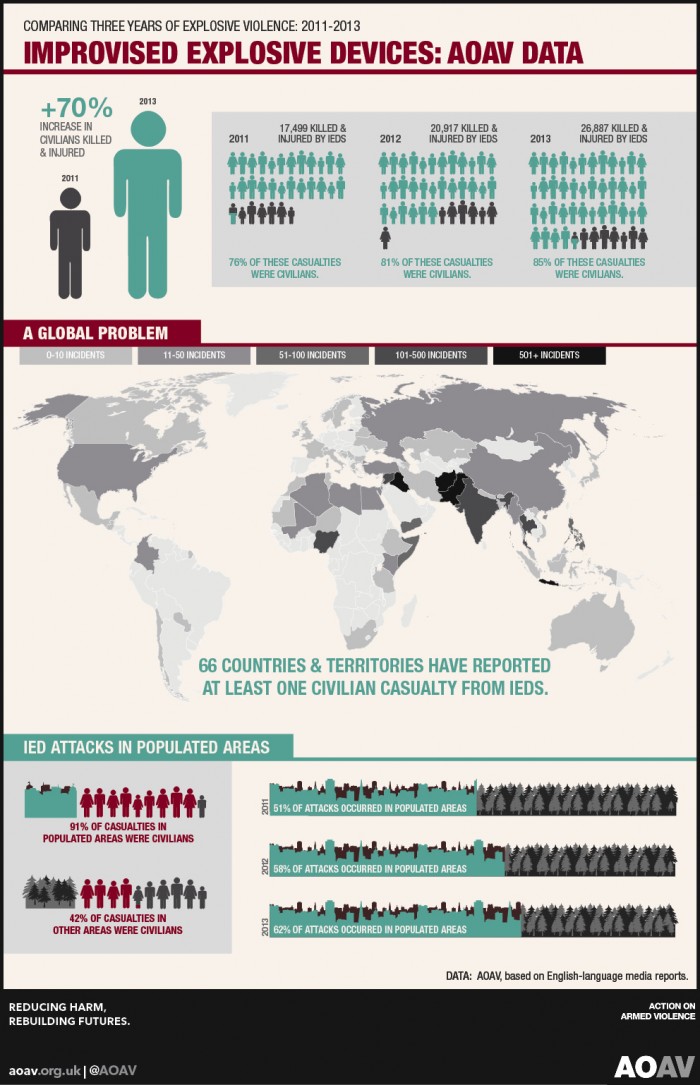