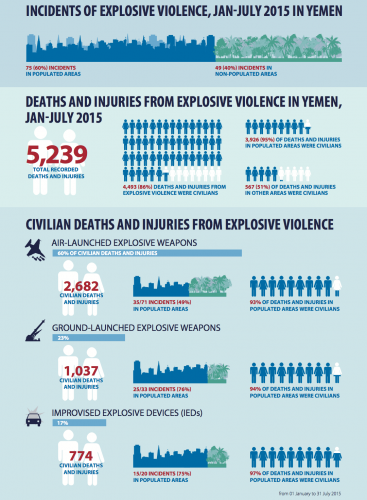 Today in New York the UK Government will host a meeting at the United Nations to shine a global spotlight on the humanitarian crisis in Yemen. This is a crisis that has been brought about largely by the widespread use of explosive weapons with wide-area effects in populated areas in the country. The UK Government should take this opportunity to speak out against the severe pattern of harm caused by explosive weapon use to civilians.

AOAV has recorded more civilian deaths and injuries from explosive violence in Yemen between 1 January-31 July 2015 than in any other country in the world. In a new report, published last week by AOAV and UN OCHA, the terrible toll of explosive weapons on civilians in Yemen this year is laid bare.

“We welcome the UK’s efforts to shine a global spotlight on the appalling crisis in Yemen,” said report author Robert Perkins. “We would urge the UK to take this opportunity to join those governments already speaking out against the severe pattern of harm caused by the use of explosive weapons in populated areas. The crisis in Yemen in 2015 shows exactly why explosive weapons with wide-area effects have no place being used in populated areas.”