What sort of country prides itself in hosting the world’s largest arms fair?

The world’s largest arm fair opens its doors tomorrow. Among those selling military and policing weapons are repressive regimes including Egypt, Saudi Arabia, Bahrain and Azerbaijan.

It is an event that begs this question:  how can Britain – a major weapons producer – claim to be at the forefront of the defence of human rights and yet at the same time be hosting an event that supplies weapons to countries with fundamental human right concerns?

How can Britain claim it is making the world a safer, better place when the British government is set on increasing arms sales to countries in the Middle East, including Saudi Arabia?

How can Britain claim it upholds values of fair play and human decency when we are happy to sell arms to the highest bidder, with little control over how those weapons will be used?

This summer, for instance, the UK delivered to the Saudis a consignment of 500-pound Paveway IV bombs, originally earmarked for the RAF. The Saudi’s fleet of strike aircraft includes British Tornados, Eurofighter Typhoons and US F-15s. And yet the British government does so despite the fact that the Saudis are leading a bombing campaign on Yemen – a country where human rights agencies have documented various examples of breaches of international humanitarian law and potential war crimes on both sides of the conflict.

With mounting evidence that British made weapons have been implicated in the deaths of civilians in populated areas from explosive weapons, the UK government should urgently investigate whether its arms and support are facilitating this and act accordingly.

It should ask itself – as we should ask parliament – whether the Saudis should be allowed to be shopping for more arms in London.

It is not just the Saudis.

Algeria, Angola, Colombia, Iraq, Oman, Qatar, Pakistan, Turkey, the UAE and Ukraine are also among the 61 countries invited to the arms fair. Israel is not an official guest, but the country’s arms industry will have pavilions there.

In total, over 1,500 companies will exhibit their wares, including the US and UK giants Lockeed Martin, Boeing, Raytheon and BAE Systems, and there will be 40 foreign government pavilions at the fair.

And so, with over 500,000 people dying every year from armed violence around the world, the question has to be asked – what sort of country wants to be hosting the world’s largest arms fair? 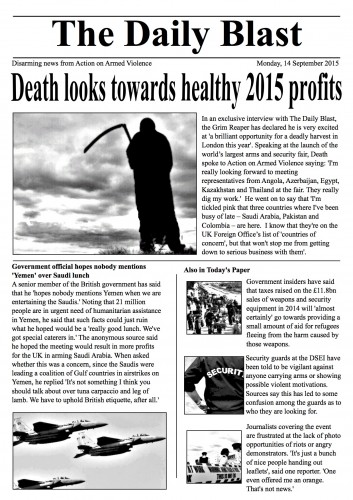