A busy road becomes the scene of sudden carnage.

An unsuspecting driver yells in panic as a rocket falls from nowhere, obliterating the lorry barely 50 metres up the road.

Smoke fills the screen amid further blasts, and the car slams into reverse to escape the heavy shelling.

The video did warn that viewers may be distressed, but it is still a shock to see the rockets thunder down on the Ukrainian city of Mariupol this weekend.

30 people were killed and another 100 injured in the attack on Saturday morning. It was one of the deadliest incidents in the conflict between Ukrainian armed forces and separatist fighters, in which there has been heavy explosive violence since May 2014.

At least 19 rockets fell across a wide area, measuring at least 1.6km by 1.1km and spanning several city blocks. They landed among an open market, a school, and damaged 67 buildings including 14 homes, either side of Olimpiiska Street which runs through the densely-populated eastern district.

The wide area coverage, and the high number of munitions that fell in just 35 seconds, suggest the work of the notorious Grad and Urugan rocket systems. Appropriately enough considering the video of Saturday’s attack, the name ‘Grad’ means ‘Hail’ in Russian, where the system was first developed, while ‘Urugan’ translates to ‘Hurricane’. Evocative names that suggest a storm of great power but little direction or control. They hardly sound like weapons that can be safely used in areas where civilians are known to be concentrated.

AOAV has previously profiled the Grad in Syria, where it has been one of the worst and most destructive weapons in wide deployment in the civil war there. The Grad can fire a salvo of up to 40 unguided, high explosive rockets in less than 20 seconds. Each rocket is almost three metres long and weighs about as much as an average man.

They cannot be targeted accurately. They aren’t designed to be. They are intended to saturate a wide area with explosive force. They have no place being used in or near a populated area.

Mariupol is a blunt and brutal demonstration of what happens when they are. 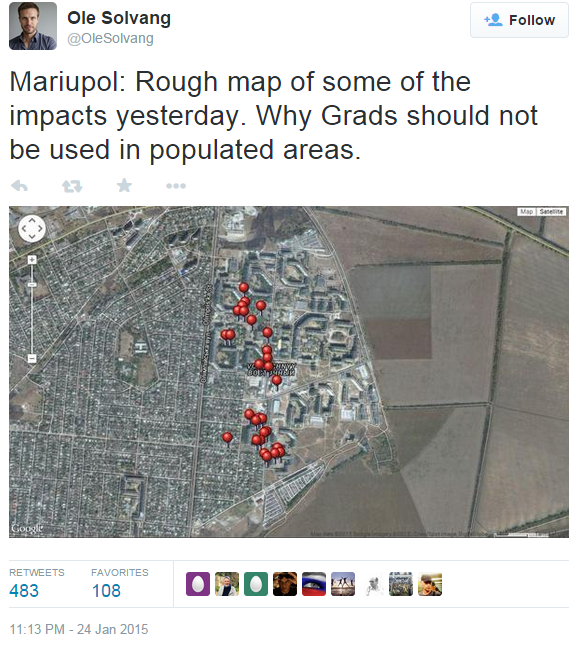 The attack in Mariupol looks to have been carried out by heavily-armed separatists operating in the area. The epicentre of the barrage is just 400 metres from a Ukrainian Armed Forces checkpoint, and independent investigators on the ground believe that the range and direction of the rocket fire suggests that the attack came from the east, in rebel-controlled territory.

Grads have played a terrible role in the conflict in eastern Ukraine, where they have been repeatedly used by both government forces and rebel militias to attack locations in densely-populated areas, putting civilians at great risk of death and injury. Mariupol, on the south-east coast of the country, had largely escaped the worst of the fighting in the last year, but Grads have periodically pummelled the flashpoint provinces of Donetsk and Lugansk since July 2014.

Government forces and various rebel groups have all been guilty of using heavy explosive weapons in populated areas in Ukraine. This includes the governments use of illegal cluster munitions in October 2014.

Ole Solvang, a researcher with Human Rights Watch, has reported from Donetsk several times in the last six months. In an interview this month with CNN, Solvang described “some of the heaviest shelling I have experienced […] you hear incoming and outgoing artillery fire literally every few seconds.” He described two problems; the first being fighting groups setting up bases in residential areas to launch attacks, and the second being return fire, launching explosive weapons back into those civilian areas often at grave cost to civilians nearby. Solvang describes one incident where such an exchange of heavy artillery landed on a neighbouring civilian home, killing a four-year-old boy.

Ambassadro Apakan, head of the Organization for Security and Cooperation for Europe (OSCE) monitors in the country, expressed outrage and concern at the “expansion of indiscriminate shelling throughout the regions of Donetsk and Luhansk, including against heavily populated areas such as Donetsk city and Debaltseve.”

Supporters of the parties to the fighting in Ukraine cannot stand by and let incidents like this, or the similar rocket strike last week that killed twelve people in a passenger bus in Donetsk, continue.

While world leaders, including Secretary-General Ban Ki-moon, have rushed to condemn the attack in Mariupol, the fact that Russia reportedly blocked a UN Security Council statement on Sunday that would have condemned and challenged the recent escalation in violence in Ukraine sends a terrible message.

There can be no ‘war-fatigue’, no sense of resignation or tacit acceptance that the bombing of civilians in Mariupol, in Donetsk, or in towns and villages scattered across the east, are an inevitable by-product of the crisis in Ukraine.

There have been recent international efforts to establish ceasefires, or to otherwise de-escalate the conflict. Many have been focused on restricting the impact of heavy weapons, like heavy artillery, large-calibre mortars, or MLRS.

Just last week, Germany brokered a deal to pull back heavy artillery from populated areas in Ukraine and establish a buffer zone to better protect civilians. Mariupol shows just why such a deal is desperately needed, and efforts should be redoubled to see that deal enforced in the region.

The expansion of the frontlines into yet another civilian heartland should be a huge wake-up call. The terrible suffering seen in the likes of Donetsk and Lugansk can’t be allowed to spread further. The world needs to establish a strong stigma against the use of explosive weapons in populated areas. It needs to step up and speak out against a pattern of shocking humanitarian suffering at the hands of weapons whose effects cannot be adequately controlled.