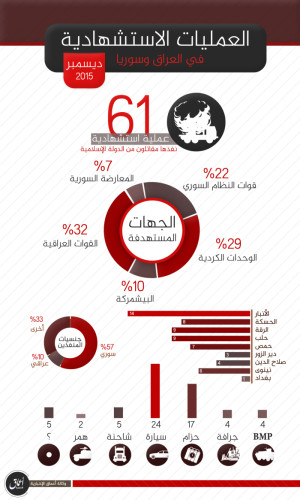 In early January of 2016, the ISIS-affiliated news agency A’maq (‘Depths’) released the most recent of a string of infographics disturbingly, perhaps, summarising various elements of the self-proclaimed Caliphate’s activities. Many of these infographics are concerned with what we might call ISIS’ achievements as a ‘state’ – the provision of social services, education and other governmental functions – which are highlighted every few days with articles from their ‘the Islamic State up close’ (ad-Dawla al-Islamiyya ‘an Qurb) series.

This one, however, has quite a different subject. Its title is ‘Martyrdom Operations in Iraq and Syria: December 2015’. It comes complete with graphs, vector images and a graded colour scheme, and claims to present an exhaustive breakdown of 61 suicide bombings undertaken by ISIS fighters over the course of last December. ‘Martyrdom operation’ (‘amaliyya istishhadiyya), it seems, is ISIS’ preferred term for suicide attacks.

Commentators have noted before how sophisticated ISIS’ media strategy is. But this use of vector images, well-designed and spaced-out facts and a smooth colour scheme is a development from the clunky Jihadist websites of a few years ago – it represents ISIS’ thorough adoption of all the tricks of a modern PR firm. Although it may seem hard to reconcile the graphic, indiscriminate violence of suicide attacks with a working knowledge of Adobe InDesign, ISIS comfortably incorporates both. The latter is used, more and more consistently, to present the bloody double-entry bookkeeping of the former.

The central pie chart gives a list of targets – 22% of attacks targeted the Syrian regime, for example, and 10% the Peshmerga. The bottom left hand corner has another pie chart giving the nationalities of the perpetrators: 57% were supposedly Syrians and 10% Iraqis, with the other 33% ‘other’. The bottom right hand corner has a list of Wilayas – ISIS’ internal subdivisions, or provinces – where the attacks took place. Here Anbar tops the list with 14 attacks – perhaps unsurprising, given the ongoing battle for Ramadi. Finally, the line graph at the very bottom of the page presents a breakdown of weapon types – from the mundane end of car bombs (24) and explosive vests (17) to the more unusual explosive-rigged diggers, trucks and BMPs.

This infographic can give us some insight into how ISIS want to be seen by their audience. Independent verification of their figures is impossible. Previous studies by AOAV and by other organisations of self-reporting on ISIS’ suicide bombings suggest that in the past, they reported far more foreign bombers than they do now. Whether this reflects a desire to be seen as more locally rooted or reflects growing numbers of Iraqi and Syrian suicide bombers, and perhaps ISIS members in general, can only be speculative at this point.

Perhaps most interesting of all is ISIS’ targeting claims. All of the five groups given – Syrian regime forces, ‘Kurdish units’ (presumably meaning the Syrian YPG), Peshmerga, Iraqi armed forces and the Syrian opposition (clockwise from top) – are combatants or military forces. Whilst ISIS does frequently use suicide bombers against military targets, AOAV recorded six suicide bombings in Iraq and Syria in December 2015, all of which caused significant numbers of civilian deaths and injuries. Five of these were later claimed by ISIS – including a triple car bombing in Tel Tamer which killed more than 50 people and another bombing in the predominantly Alawite neighbourhood of Zahra, Homs which left more than 140 dead and injured.

It may not come as a surprise that ISIS attacks claim large numbers of civilian lives. But it seems that in their bureaucratised, sterilised infographics, admitting as much would be too much even for them.