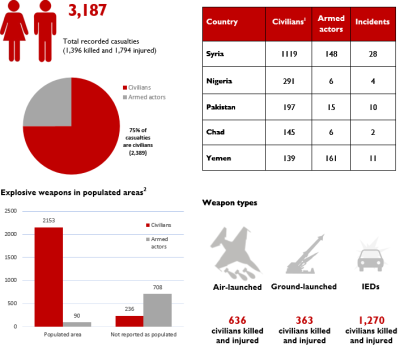 In December the single most lethal incident of explosive violence worldwide was a market bombing in Idlib, Syria.

On Sunday the 20th, bombers suspected to be Russian launched six separate airstrikes on different locations across the northwestern Syrian city of Idlib, leaving at least 73 civilians dead and 150 more injured. Since mid-2015 the city has been controlled by the Army of Islam, one of a number of Syrian opposition groups fighting against the government, and was recently proposed as a potential interim seat for a Syrian opposition parliament. As a result, it has been a frequent target of government and, more recently, Russian bombing raids. In June 2013, AOAV recorded 130 civilian deaths and injuries as the result of a single Syrian government missile attack on a residential neighbourhood in the city. In December’s attack the locations hit included a number of government buildings and a market, continuing a bloody trend of airstrikes on densely populated civilian areas. AOAV has previously highlighted market bombings in Syria, most recently in August.

During the week of the 14 December, the Maram foundation trucked tents in two vehicles from the Turkish border towards Latakia province in Syria to provide shelter for the increasing number of people displaced by air raids. When they saw Russian bombers approaching the road, the aid workers stopped the trucks and ran way. After an hour, when the jets had disappeared, the staff dared to return to their vehicles and continued their journey. While neither the aid workers nor their cargo was hit in this case, the incident illustrates the fear among aid workers and the resulting delays in the delivery of aid when explosive weapons are insight near major supply routes during intensified air campaigns that cause civilian casualties, damage civil infrastructure and trigger displacement.
The Maram Foundation, like all aid agencies, is concerned about the safety of their aid workers and introduced added security measures for the supply trips into Syria.

They no longer travel in convoy but leaving a few kilometers between trucks. They no longer take the vehicle directly to the warehouse. This has slowed down distribution. The cumulative effect of security measures introduced across the board by aid agencies in response to the intensified bombing resulted into a sharp decline in the quantity of aid delivery. According to Mercy Corps, one of the largest aid agencies working in Syria distributing aid with the help of local partners, the organisation’s ability to transport and distribute food fell by 80% since the number and severity of air strikes increased over northwest Syria following the downing of the Russian plane by Turkey on 24 November 2015. Commercial suppliers, who use the same routes, experience identical threats and have taken similar measures. The result are food and other shortages in Syria. Armed fighter jets overflying major supply routes, even if they never directly bomb the highway, have a devastating effect on aid agencies’ abilities to mitigate the effects of the use of explosive weapons on the civilian population.

[3] For more on the attacks on supply routes, please see: www.middleeasteye.net/news/it-s-hard-imagine-conditions-getting-worse-syria-they-are-322835650?mkt_tok=3RkMMJWWfF9wsRoks6TJcu%2FhmjTEU5z1%E2%80%A6 and www.chicagotribune.com/news/nationworld/ct-russia-airstrikes-syria-20151214-story.html?mkt_tok=3RkMMJWWfF9wsRoks6vNcu%2FhmjTEU5z17e4vT%25%E2%80%A6