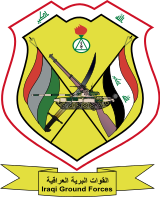 The Iraqi Security Forces have faced serious threat from IEDs, as such it has been the priority of many foreign western state governments to assist in training the security forces, so that they can respond to the C-IED threat posed by insurgent groups, particularly ISIS.

Many of the Iraqi forces have had direct experience with IEDs. However, given the increasing threat from IEDs by ISIS, coalition forces have started a Building Partnership Capacity mission designed to train Iraqi Army units in various tactical subjects to include CIED, an area the Iraqi Army particularly requested training in.

As part of this mission the Marines and the Danish Army provided a counter-IED class for members of the Iraqi Army to teach them basic IED reaction and mitigation skills at Al Asad Air Base, Iraq, in January 2015.

The Iraqi Security Forces have also received further US assistance in the form of JIEDDO. Again, this has predominantly involved C-IED training based on JIEDDO’s own experiences in Iraq.

Training has also been conducted by the UK, who sent 50 personnel from 33 Engineer Regiment, Explosive Ordnance Disposal (EOD), to C-IED instruction to members of the Iraqi Security Forces in Besmaya and Taji, in October 2015.