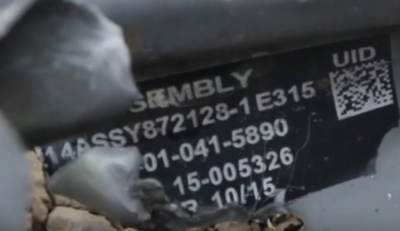 Human Rights Watch (HRW) released a report yesterday, December 8th 2016, on the unlawful airstrikes committed by the Saudi Arabia-led coalition in Yemen, and the role of the US and other foreign governments who have supplied weapons to Saudi Arabia.

Many populated areas have been hit by the coalition airstrikes and resulted in the death and injury of thousands of civilians. The HRW report, Yemen: US-Made Bombs Used in Unlawful Airstrikes, draws particular attention to the use of newly supplied US weaponry that that have used in aerial bombardments. Remnants of US-supplied weapons have been found at the site of 23 coalition airstrikes that appear to have been committed in contravention of international law.

These weapons have been used in unlawful attacks that have killed civilians, including many children.

Some of the remnants that have been found in Yemen at such sites, come from weapons that were manufactured in the US after many – such as the UN and HRW – had already reported unlawful attacks by the Saudi-led coalition.

Whilst the report recognises steps that the US has taken to review the sale of weapons to Saudi Arabia, it also calls for more to be done.

UK weapons have also been found at the sites of unlawful attacks. Despite evidence to the contrary, on November 15th, the UK Foreign and Commonwealth Office concluded that there was no clear risk of serious Saudi breaches of international humanitarian law in Yemen.

It has been recommended by HRW and many other organisations that all those selling weapons to Saudi Arabia should suspend sales until unlawful attacks are ceased and investigated thoroughly.

AOAV’s Explosive Violence Monitor has recorded over 6,000 civilian deaths and injuries caused by Saudi-led coalition airstrikes in Yemen. Of these, at least 85% have occurred in populated areas, such as residential areas, schools, hospitals, public buildings, and commercial premises.

AOAV reiterates the calls of HRW and encourages all states supplying arms to Saudi Arabia to suspend these sales until proper investigations have been conducted and such attacks cease to occur.