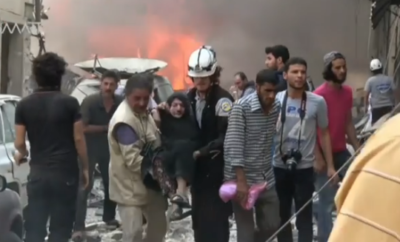 Between Friday and Sunday, over 110 were killed, including 32 children, and 195 wounded, in explosive violence in Syria. Most were caused by air strikes but shelling from rebels and ISIS also carried a heavy civilian toll.

The worst of the attacks saw airstrikes on Saturday, September 10th 2016, hit a market and other populated areas of the city, Idlib, in which 62 were killed.

The death toll has continued to rise since the attack with initial reports citing 24, followed by 58, reported on Saturday, as more of the wounds on the injured proved fatal. The Syrian Observatory for Human Rights had reported at least 90 wounded on Saturday from the air strikes.

It is not clear how many of the 62 are armed actors such as security personnel, police, or rebels, as many of the bodies are said to be beyond recognition.

The Syrian Observatory reported that the dead included 13 women and 13 children, many of whom were shopping at the market in preparation for the Muslim holiday of Eid al-Adha.

The attacks were reported by the Local Coordination Committees to have been carried out by Russian warplanes. Other reports were less quick to point to Russia, but said that the attack was carried out by planes typically used by Russia.

Other air strikes over the weekend, saw four children reported to be amongst the dead in an air strike on Douma, though from news reports the total death toll and the perpetrator of this attack are not clear.

On Sunday, Russian jets bombed a residential area in Salihin, Aleppo, in an attack that killed at least 10 and injured 18. Of those dead, seven were children and two were women. Cluster bombs were reported to have been used.

According to the Syrian Observatory, regime air raids on rebel-parts of Aleppo killed six civilians and wounded 30 on Sunday.

Barrel bombs were also dropped on Friday and led to the death of nine people, including four children, whilst at least five were wounded.

These reports show that over 110 were killed in explosive violence in Syria between Friday and Sunday, and almost 200 were injured. Of the dead, children accounted for at least 32.

A ceasefire in Syria is due to begin at sundown today. The violence in Syria was greatly reduced throughout Syria in March after the ceasefire; the total deaths and injuries in March were at least 50% less than those recorded in any other month in 2016.

AOAV strongly condemns the use of violence against civilians and calls upon all groups to reject the deliberate targeting of civilians. The use of weapons with wide-area impacts should also remain of concern; due to the severe impact these have on civilians. All actors must urgently address the civilian harm in Syria. The situation in Syria requires an urgent response to prevent further suffering of Syrian civilians, who have for too long borne the impact of the violence in their country. It is hoped that the ceasefire, due to begin today, will lead to a significant reduction in violence and allow civilians to reach the aid that so many need.