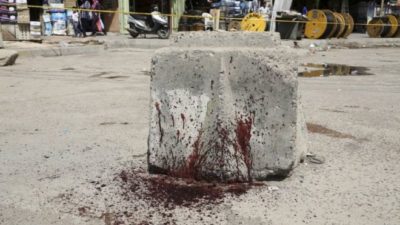 At least 15 people were killed and 55 were wounded yesterday, September 27th 2016, in two suicide attacks in Baghdad, Iraq.

The first attack occurred in Jadida, an eastern neighbourhood in Baghdad city, as the bomber detonated his explosives near some construction workers in a commercial area.

The bomb killed at least eight people and injured 29.

There were reports that a roadside bomb also went off.

The first attack had been claimed by ISIS but so far no one has claimed the attack in Bayaa, though suspicion has fallen upon ISIS who frequently commit such attacks.

Shiite populations are often a target of ISIS attacks. Some of ISIS’s attacks this year targeting Shiites include: the suicide bombing at a football stadium killing at least 41 and injuring 105, suicide attacks on the Shiite majority city of Hillah, killing at least 47, and a suicide bombing  at a market targeting Shiite civilians, which killed at least 67 and injured more than 150.