This report is part of a series of case studies that make up an analysis of the wide area effects of certain explosive weapons and the concern about their use in populated areas.  The report – Wide-Area Impact – can be read here. A video of air-dropped bomb use can be seen here. An infographic covering this form of weapon can be seen here.

The explosive weapons with a wide impact area that AOAV investigated in Yemen were those capable of projecting blast and fragmentation effects over a particularly large radius. All explosive weapons affect an area. When a bomb, rocket, mortar or shell explodes, in a matter of microseconds a devastating shock wave has rippled out at supersonic speeds, followed by a blast wind which is channelled, muffled or magnified in unpredictable ways by the obstacles of buildings, cars and people that crowd a densely-populated area.

This happens every time an explosive weapon detonates, to a greater or lesser degree. What makes a particularly large destructive radius is not simply an equation of scale. The impact of a weapon can be a result of many factors of design and deployment, including the ratio of explosive material to casing, the type of explosive used and the fuse on the weapon (whether it is designed to explode above ground, on impact, after contact etc.) It is not as simple as a direct correlation between the size of the weapon and the size of its corresponding impact. However, the two are clearly related, and the use of heavy explosive weapons (such as large aircraft bombs, rockets and missiles) in a populated area will invariably result in a large number of deaths and injuries, demolishing buildings and crushing vital civilian infrastructure. 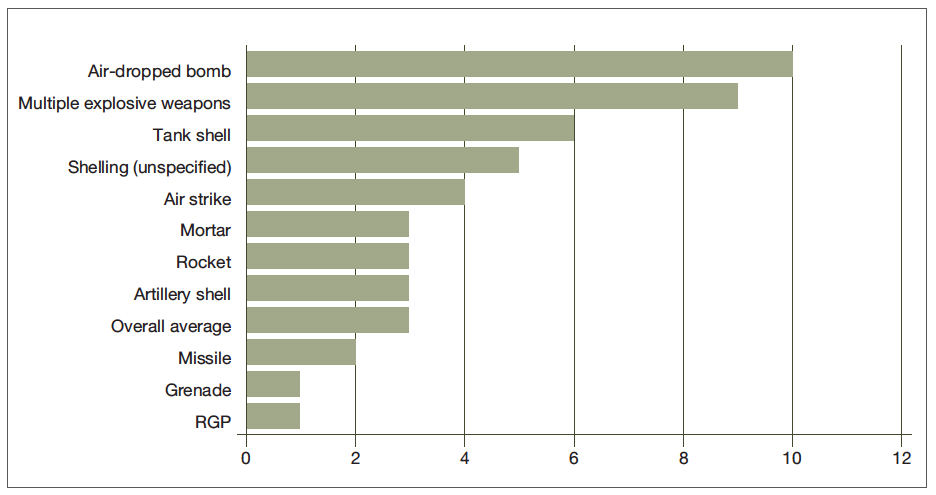 Weapon type under investigation
Aerial bombs stand out as particularly concerning in AOAV’s near five-year dataset on explosive weapons harm.

The fact that these weapons habitually kill so many people in a single incident is strongly indicative of an inherently large destructive capacity. The broad correlation between the size of a weapon and its impact is suggested in the figure to the left. Those weapons near the bottom of the scale are typically light, portable, and deployed by individuals or a crew, such as rocket propelled grenades (RPGs). Those manufactured weapons that are more likely to kill large numbers of people at a time are largely those deployed by heavy weapon systems like tanks and planes.

Country under Investigation
State forces have dropped aircraft bombs in populated areas in many countries over the past five years. Civilians have been killed and injured by explosive weapons dropped from aircraft in at least 19 different countries and territories since 1 January 2011, including Syria, Gaza, South Sudan and Afghanistan.

In 2015, though, it was Yemen that suffered most from the use of heavy aircraft bombs in populated areas. On 26 March 2015, a coalition of states led by Saudi Arabia began a campaign of aerial bombing against targets across Yemen. It was an attempt to push back the advances of Shia armed groups—commonly known as Houthis or Ansar Allah—and forces loyal to the country’s former President, Ali Abdullah Saleh.

Thousands of aerial bombs have been dropped on Yemen since the March offensive began. The harm they wrought was considerable. Aerial bombing was responsible for 60 per cent of recorded civilian deaths and injuries from explosive violence in Yemen in the  first seven months of 2015. In that time, AOAV recorded 3,287 total deaths and injuries from air-launched explosive weapons, of whom 2,682 were civilians (82 per cent). On at least eight occasions an aerial bombing incident was reported to have killed or injured more than one hundred civilians. As AOAV’s data is recorded using English-language media reports only, the true civilian toll from such strikes is likely far higher.

Much of the bombing in Yemen has taken place in populated areas, with a widespread pattern of strikes hitting civilian residential areas and vehicles, schools mosques and markets, including within the capital city Sana’a. Military and security installations, as well as buildings used as official Houthi offices, are scattered throughout built up areas of Sana’a. As a result, even where the reported targets are claimed to be military, airstrikes in these locations have resulted in civilian deaths and injuries, as well as extensive damage to nearby civilian homes, shops, hospitals and schools.

Please visit here to read our case study in Yemen focuses on how the use of a large explosive weapon in a populated area impacts on civilians. Research for this case study was carried out in September 2015 by Iona Craig, an award-winning independent journalist who first moved to Yemen in October 2010 as the correspondent for The Times (of London).