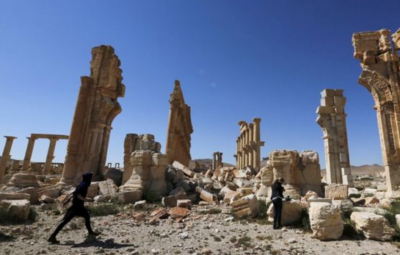 The dead are said to include 28 children, according to the Syrian Observatory for Human Rights.

Alongside airstrikes, it was reported that barrel bombs laced with chemicals, possibly sarin gas, may have been used, causing the suffocation of civilians.

Both Syria and Russia have been accused of using chemical weapons, and both have denied the accusation. After a UN conducted an investigation into the use of chemical weapons in Damascus, it confirmed that sarin gas had been used in the rebel-held suburb of Ghouta. Syria continued to deny they had used chemical weapons.

There are some conflicting death tolls for Monday’s incident and the number of those injured is rarely reported. One source, Ahmad al-Dbis, of the Union of Medical Care and Relief Organizations (UOSSM), said that 86 people were killed and 250 injured.

It is unclear whether Syria or Russia (or both) are responsible for the attacks on Hama province.

Over 20 civilians were also killed in airstrikes in Raqqa the same day. Again, it was not clear who carried out the strikes.

Whilst airstrikes killed more than 30 in airstrikes in Aleppo on Sunday, and 9 killed in Idlib.

Between January and November 2016, Syria has seen almost 12,000 civilian deaths and injuries as a direct consequence of explosive violence. Of these, 48% were caused by air-launched attacks.

Compared to the same period last year, AOAV has recorded a 56% increase in civilian deaths and injuries from explosive violence in Syria, despite the inevitable reporting fatigue on the Syrian conflict and the fact that millions have already fled the violence.

State actors have been responsible for at least 55% of civilian deaths and injuries in Syria this year. The main state perpetrators of explosive violence have been Syria and Russia.

AOAV strongly condemns the use of violence against civilians and the use of explosive weapons in populated areas. States are encouraged to refrain from using such weapons where there is likely to be a high concentration of civilians. Further, the international community should seek to urgently address the situation in Syria, where civilians have for too long faced the devastating impacts of explosive violence.