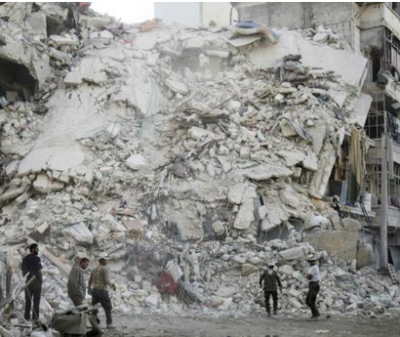 After the relative quiet of recent weeks, Syria was faced with a surge of airstrikes on Wednesday, November 16th 2016, particularly in Aleppo. At least 87 were reported to have been killed in rebel-held areas in Aleppo.

No area was safe. Hospitals, residential areas, areas near schools, were just some of the civilian areas pounded by air-launched explosives.

Barrel bombs were reported to have hit the Children’s Hospital, Al-Bayan Hospital and the Central Blood Bank in Al-Shaar neighborhood.

Many buildings were flattened by the strikes in Aleppo, reducing more of the city to rubble.

In one village alone, Batbo, in the Aleppo countryside, over 20 were killed and 50 injured, according to the White Helmets.

Many children were reported to be among the dead and wounded.

Of the civilians killed and injured between 2011-2015 by explosive violence in Syria, 16,657 have been reported on English language media from explosive violence perpetrated by state actors, predominantly Syria and Russia. Of these state perpetrated attacks 466 were air-launched, which alone were responsible for 10,065 civilian deaths and injuries.

So far this year, Syria has consistently suffered the most civilian deaths and injuries each month, apart from a brief respite in March, despite ceasefire violations. More civilians have been killed and injured in the explosive violence so this year than in the entirety of 2015. The situation appears to only be getting worse.