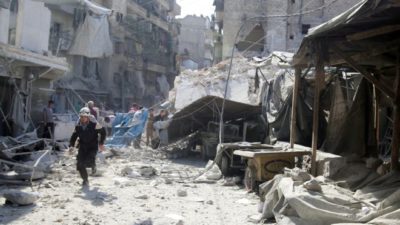 Airstrikes on rebel-held neighbourhoods of Aleppo killed at least 41 civilians on Tuesday, October 13th 2016. Of those killed, five were said to be children. Elsewhere, it was reported that whilst over 40 were killed, more than 70 were also injured in the attacks, according to Amar Salmo, who leads the area’s civil defense volunteers.

Salmo also specified that at least 20 of the weapons dropped, were bunker-buster bombs and caused a lot of damage.

It took civil defense volunteers hours to sift through the rubble to pull bodies from the carnage. Whole families had been buried under the debris.

It was not clear whether the strikes were perpetrated by Russian or Syrian aircrafts.

The day after, similar attacks continued, with 15 killed in an airstrike on a market, and a further 10 killed in the surrounding neighbourhoods in Aleppo.

On Monday, 14 were killed by bunker buster bombs in rebel-held Aleppo.

Other airstrikes across the country on Wednesday, saw one killed and three wounded in Kfarbatna, Damascus, and a further 10 wounded in Saqba, Damascus. The airstrikes in Damascus were said to have been perpetrated by the Syrian government.

Non-state explosive violence, such as shelling, has also taken place in government-held areas of Aleppo, killing and injuring many. Wednesday saw five killed and 13 wounded in such violence. Similar violence had occurred on previous days.