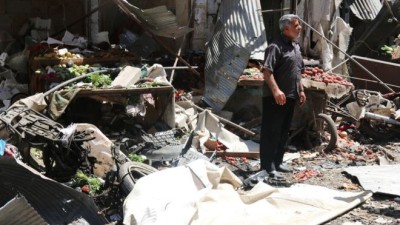 On Tuesday, March 19th 2016, the Syrian government carried out airstrikes across Idlib, Syria. The strikes, hitting highly populated market areas, killed dozens – in what has been said to be the most lethal attack since the ceasefire took effect.

The attacks hit a fruit and vegetable market in Maarat al-Numan, killing 37, and a fish market in Kafranbel, which killed 7. Overall, the attacks on these markets have killed at least 44 and wounded 80.

The areas targeted by the airstrikes are those controlled by the Al-Nusra Front, an Al-Qaeda offshoot. Syrian’s main opposition group suspended its participation in the ceasefire deal that took effect on February 27th due to alleged government violations. It is thought that the continued fighting over the last few days could threaten to break the ceasefire.

There has been great concern in regard to the impact that state violence has had on civilian life in Syria, especially from the use of barrel bombs. The impact of explosive violence on civilians is explored in AOAV’s film Syria’s Shockwaves.

From AOAV’s Explosive Violence Monitor over the last five years, Syria was found to be the one of the states worst affected by explosive violence. A total of 36,224 deaths and injuries from explosive violence were recorded – of these 86% (31,290) were civilians.

AOAV strongly condemns the use of violence against civilians and calls upon all groups to reject the deliberate targeting of civilians. All actors must urgently address the civilian harm in Syria and agree to a ceasefire. The situation in Syria requires an urgent response to prevent further suffering of Syrian civilians, who have for too long borne the impact of the violence in their country.