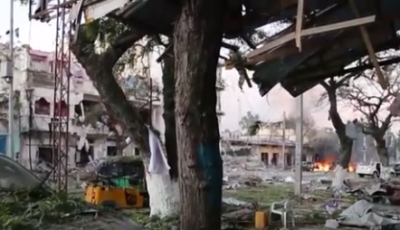 The attack, that continued throughout the night, began Wednesday evening, June 1st 2016, at Mogadishu’s Hotel Ambassador in Somalia.

After a suicide car bomber crashed into the gates of the hotel, gunmen proceeded to raid the hotel. Many were killed in the initial bomb blast, including two Somalian MPs – Abdullahi Jama Kabaweyne and Mohamoud Mohamed Gure.

In total the bomb and gun attacks are said to have killed at least 16 and injured a further 55. Most of those killed and injured were civilians.

Though the African Union peacekeeping force, AMISOM, were able to push al Shabaab out of Mogadishu in 2011, the group have continued to carry out many attacks across Somalia, as well as in Kenya and Uganda.

In 2015, 700 people were killed in incidents involving explosive violence in Somalia, of these 64% (451) were civilians.

IEDs are extremely lethal and are seeing wider and wider use. AOAV’s Explosive Violence Monitor 2015 found that of all IED attacks, the ones that posed the most danger were suicide attacks.