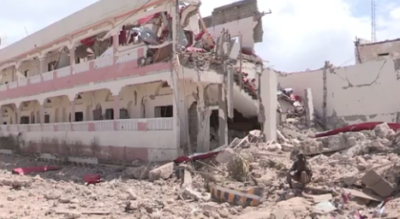 Yesterday, August 30th 2016, al Shabaab carried out a suicide car bomb attack in the Somali capital, Mogadishu. The blast targeted the presidential palace and caused the death of at least 15 and injured 45.

However, medical officers quoted a higher death toll of 22.

The blast also damaged surrounding buildings, including that of two nearby hotels.

Though the African Union peacekeeping force, AMISOM, were able to push al Shabaab out of Mogadishu in 2011, the group have continued to carry out many attacks across Somalia, as well as in Kenya and Uganda.

In 2015, 700 people were killed in incidents involving explosive violence in Somalia, of these 64% (451) were civilians.

IEDs are extremely lethal and are seeing wider and wider use. AOAV’s Explosive Violence Monitor 2015 found that of all IED attacks, the ones that posed the most danger were suicide attacks.